Acid? Muscle relaxants? Or just being awesome? We may never know. But we can keep watching. Because Ashley S.–our Ashley Brooke Salter–got (against seemingly insurmountable odds and conventional wisdom) yet another rose from Prince Farming on Monday night’s episode of The Bachelor.

“That has to just be the producers keeping her on,” my wife said.

Sure, maybe. Because Chris Soules, at times during his one-on-one interactions with the 2012 Auburn grad, whom Bachelor host Chris Harrison promised would be “the most talked-about girl on the show for quite some time,” looked genuinely concerned. Not just for her, in one of those I-want-to-rescue-her-from-her-demons kinda ways. Chris doesn’t seem like that kind of dude. No, he seemed legitimately concerned for himself.

Maybe you can’t blame him. Because there’s Ashley on the group date at the paint ball haunted house, not squealing like the others, not pretending to be scared, but walking straight into the zombie hordes, emptying her gun into the corpses of actors just trying to earn a buck as target practice. They were already shot, on the ground, just waiting for the cameras to leave. Ashley didn’t care. There was gusto in her goggled eyes, a palpable purpose in her walk. She didn’t care about winning a reality show. She cared about killing.

When she interrupts Soules’ “Tell Us About It” interview with the show’s producers, beelining into the spotlight right at he’s telling the world he’s not sure what’s wrong with her, but that something definitely is wrong with her, he actually takes what I’m sure a body language expert would consider a defensive stance.

“I don’t want to be fake with you,” Ashley tells him. (So when she told him half a second later that his leather jacket smelled really nice, you know that thing must have smelled amazing.)

A second goes by.

“I don’t even know what you’re asking me.”

The other girls stare and OMG and offer theories (the consensus: narcotics).

Then she offers her deepest thoughts of the show: “You don’t want to lose the whole world, right?”

Last week, the night of the season premiere, Soules’ appeared on Jimmy Kimmel Live. Kimmel held up a picture of Ashley. “True or false — appears to be crazy,” Kimmel says. 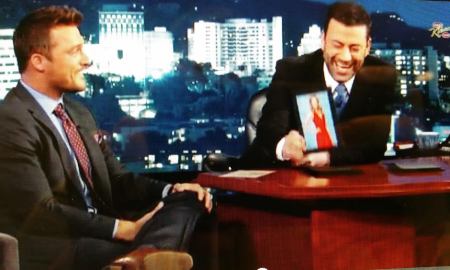 Who’s going to get the rose, the freaked out competition asks her, as they huddle together for protection under blankets.

“Maybe an angel,” she says. Moments earlier, she said to no one in particular, “there are, like, angels, literally” as she stared at a candle or something.

“People watch the show and see crazy people here and think ‘is that staged, is she an actress? What’s going on? Is she really that crazy?'” says some boring contestant as the scene comes to a close. “And I’m here to tell everybody that Ashley is full-blown… a crazy girl on The Bachelor.”

And the show is better for it.

Related: Auburn grad Ashley Brooke Salter stars in new season of ‘The Bachelor’; host calls her ‘the most talked-about girl on the show for quite some time’.