Last week we learned that what little we thought we knew about the history of the eagle statues at Toomer’s Corner was wrong, duh… because this is Auburn, and that’s what happens when you’re dealing with traditions tied to Toomer’s Corner (see: everything).

Sure, we have the where and the when (or the when-ish), who, and why. But there’s still the how (and a little bit more “why” wouldn’t hurt)—or at least there was until we got this delightful email from Genevieve Primos, the granddaughter of W.C. “Red” Sugg, who brought the eagles to Auburn in 1961, and who turns up under pretty much any rock you care to turn over in the name of AUrchaeology (see: Walt Disney’s Auburn Tiger).

Primos (who is also the great-granddaughter of Cliff Hare, maybe you’ve heard of him) wrote that she just so happened to be visiting her mother, Red’s daughter, on Friday when she saw our post. Her mother, Marcia Sugg Coombs, was able to “fill in some of the blanks about the eagles!” The rest is (the real) history.

Red was an avid Auburn fan and grew up in Auburn.   As a young boy he worked at Homer Wright’s drug store (down the block from Toomer’s Corner) and went on to get his pharmacy degree at Auburn University.  He had a successful career with Upjohn Pharmaceutical becoming the Sales Director and relocating to Michigan.  One day, he was traveling in Philadelphia by car with a driver. He noticed the Eagles perched at the end of a  driveway in a residential neighborhood.  He drove up the driveway, engaged the owner of the home in conversation, and somehow arranged for the eagles to come to Auburn!  Obviously he was a good salesman and my mother said this type of thing was not unusual for him!  Red was also a friend to Walt Disney and talked Walt into drawing him a picture of an Auburn tiger carrying a football!  When Red retired from Upjohn in 1965, he and my grandmother returned to live in Auburn. He worked at Toomer’s Drug Store part-time for fun when not attending Auburn football games! Red died in Auburn in 1975. 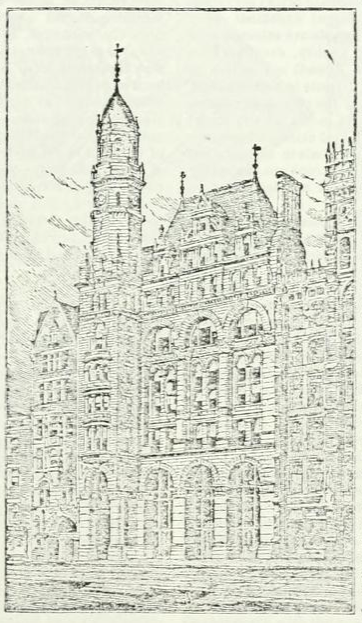 The building was designed by noted Philadelphia architect, Theophilus P. Chandler, Jr., and built by contractors, J. E. & A. L. Pennock (a noted contractor that built stuff like the Knickerbocker Hotel in New York, and an academic building at West Point, and stuff) in 1890, for an estimated cost of between $400,000, to $500,000.

Get out your copy of Illustrated Philadelphia: Its Wealth and Industries. American Publishing & Engraving Co., or go here and look at page 103, first column, near the bottom of the page: “A marble gable will rise 32 feet over the recessed portion of the front, and graceful ornamentation will relieve the otherwise classic outline of the facade.”

Also, and you’ll LOVE this—check out page 49. The Penn Mutual Building illustration accompanies the chapter entitled, “A Bird’s-Eye View of the City.”

Thanks, Genevieve. Thanks, Auburn Elvis.

You can see some great photos of the eagles high in the Philadelphia sky here.

Related: That red paint they found on the eagles.