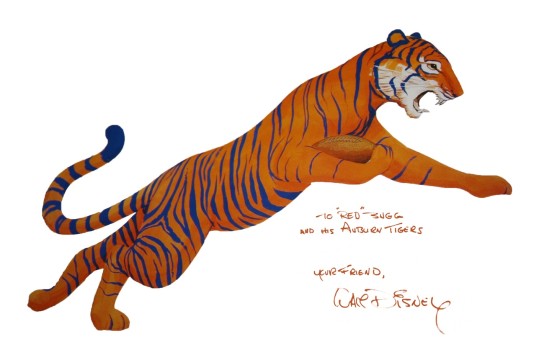 For the Auburn fan whose father does an incredible Donald Duck impression, Oregon’s 60-year relationship with Disney is a hard pill to swallow. But need it be? What if there were a spoonful of historical sugar to help that medicine go down?

The Oregon Duck has the typical wacky back-story of almost every collegiate mascot. (Looking in the mirror here, of course.) Way way back in the early 1920s, or maybe the ’30s, a group of fraternity boys at the University of Oregon started bringing a live duck, Puddles, to sporting events. Puddles, a tamer, lamer War Eagle, quacked around campus, ingratiating itself with the student body and alumni. In the early ’40s, cartoons of Puddles began appearing in student publications. Problem was that Puddles looked a lot like Donald Duck.

Leo Harris, Oregon’s first athletic director, realized the copyright conundrum and met with Walt Disney in 1947. They came to an informal agreement: Oregon could use Donald’s likeness as long as the Oregon Duck behaved himself and didn’t besmirch Donald’s good name (and he would besmirch). During their informal agreement, Walt Disney Productions actually drew several versions of the Duck for Oregon to use.

Auburn, on the other hand (o’ sweet relief!), actually has a personalized Auburn Tiger — playing football — drawn and autographed by Uncle Walt himself. It was given to “Red” Sugg , son-in-law of Auburn legend Cliff Hare, sometime in the 1950s (good days to be an Auburn Tiger), and it’s not just some diner napkin doodle. It’s pretty and artsy and classy enough to frame and hang in a museum, which is exactly what Auburn did—the Lovelace Athletic Museum, specifically. Our beloved, legendary mascot may not be based on a Disney character, but no doubt Walt whooped a few “War Eagles” back in the day.

Around the time of Walt’s death in 1966, Walt Disney Productions and the University of Oregon realized an official contract regarding Oregon’s use of Donald’s likeness didn’t exist. The only evidence Oregon actually had of Walt’s endorsement? A photo of him and Disney voice-acting god Phil Harris (Robin Hood, Jungle Book) that showed Walt wearing an Oregon letterman’s jacket featuring Puddles. Disney apparently thought that was enough and a written agreement was reached in 1973 allowing Oregon to use Donald, but requiring the school to split merchandise sales.

While Disney and Oregon still have an agreement on merchandise bearing an unmistakable (albeit Oregonized) Donald, the mascot, which was decided to be “not substantially similar to Disney’s Donald Duck character,” was in March freed of his Disney shackles. Which means the Duck can now appear in rap videos and mascot challenges without fear of licensing issues. The agreement also assures “Mandrake” (RoboDuck, Duck Vader) will never, ever return.

So where does that leave the Disney-obsessed Auburn fan emotionally? Can we still YouTube the first episode of Duck Tales between now and January 10 in good conscience?

Using the air pocket between our cheek and the back of our throat, TWER says “Yessss.”

Walt Disney’s cold, cash-driven contract with the Oregon Ducks was predicated by plagiarism, supposedly sealed with a handshake, and upheld by an old picture of Walt in an Oregon jacket.

His warm relationship with the Auburn Tigers begins in the most delightful, medicine-masking way: a personalized gift to a friend.

As he watches the national championship game from up in that great Magic Kingdom in the sky, we know whom he’ll be rooting for.

Want to help TWER keep on keepin’ on? It’s easy.