When it comes to racing automobiles (on foot), Bo prefers the Smart Car. But for chauffeuring tigers, nothing beats a Pathfinder. Bo knows this.

Auburn’s second Heisman Trophy winner is featured (in an Auburn jersey) doing just that in a new Nissan print ad that is part of the car company’s new Heisman House advertising campaign.

Nissan is the presenting sponsor of the Heisman Trophy and also sponsors a college football tour, the Sports Illustrated Heisman Tour presented by Nissan, which will be making a stop in Auburn before the LSU game.

The ad will appear in Sports Illustrated, ESPN The Magazine and in the tour’s custom publication. 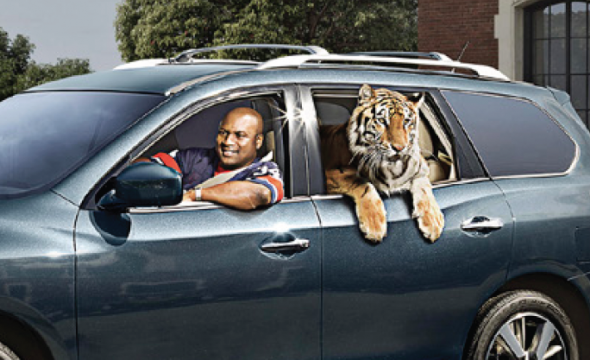