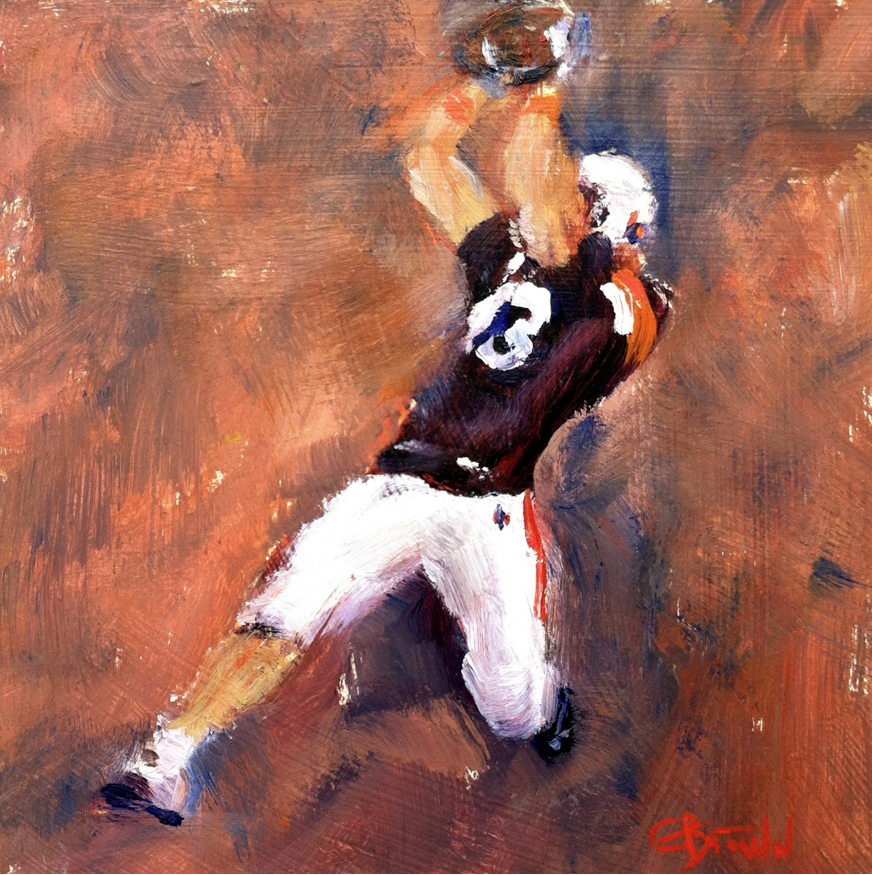 My first memory of Philip Lutzenkirchen was when he had scheduled an appointment with our Communication and Journalism department chair during his official recruiting visit in 2008.

The chair at the time, Dr. Mary Helen Brown, referred me to his highlight video on YouTube.  Plenty of high-high-highlights.  My favorite was of him blocking a punt and running it in for a touchdown.  He didn’t exactly run it in.  He stood head and shoulders over everyone on the field, so he basically jogged in, swatted the ball away from the punter’s foot, picked it up and carried it into the end zone.  Opposing players jumped around him like Jack Russell’s leaping at a man holding up a Frisbee.  Lutzie made it to the end zone no problem.

Now, with this tweet Saturday that he will miss the rest of the season, it’s fitting to remember what he brought to Auburn.  I always called him “the mayor of Auburn University,” with his popularity and influence on campus.  It is just sad to see it come to an end.

Of course, Lutzenkirchen signed with Auburn, even if the midst of the Tuberville turmoil.  In one of his tweets, he said he never regretted his decision to come to Auburn.  Nor did his fans.

Philip actually enrolled as a major in the department (good job, MHB), so we remained in cordial contact throughout.  At one time, I think he was a radio-TV-film major, though he ended up majoring in communication.  RTVF seemed a natural major, particularly after his ESPN fame for a highlight where he tipped an end-zone pass to a teammate as he leaped out of bounds.

The clip earned some studio time on ESPN — an appearance that, he admitted, he was not pleased with.  He was too rough on himself.  It wasn’t worse than 90 percent of the interviews you see on ESPN (and better than almost all of Skip Bayless’s and Stephen A. Smith’s rants).

The summer after his freshman year (which included touchdown receptions against LSU and Mississippi State), I requested that he serve as press conference guest for our 2010 Summer Journalism Workshop for high school students, noting that he was after all a major and that would help us recruit.

He and Morgan Toles, a women’s basketball player (who sadly also had to stop playing for injury reasons) did a great job.  Lutzie had a good sense of humor, even when one young lady’s press conference question was, “Are you dating anyone? Kidding!”  From an instructional perspective, that gave me a great opportunity to warn the students about asking creepy questions.

Trivia buffs: At that conference, we learned the meaning of his name: “light” (lutz) “of” (en) “the church” (kirchen).  I’ll leave further comment on that to the ode-sters.

The press conference, obviously, was the impetus of Philip’s contributions to Auburn’s dream season.  Big TD passes against South Carolina, Georgia (twice) and, of course, Alabama — the catch that gave birth to his TD dance deemed “the Lutzie.”  A somersault-capped catch in the national championship game.

Even in 2011, as Auburn struggled on many fronts to an 8-5 season, Lutzenkirchen had his moments — the best being a one-handed grab against Ole Miss that made the Top 10 for several of ESPN’s endless array of Top 10 segments.  Unfortunately, the catch also led to the first of many injuries that Philip would endure — a torn labrum that required shoulder surgery.

But as he remained at Auburn, his favor among the students increased — enhanced by a decision to return for his senior year.  Whether in person or on his popular Twitter account (a weird stretch of letters — oh wait, it’s his last name), Lutzie became something of a campus icon.

So as this year descended into something of a disaster, fans felt a particular heart tug for the tight end who had given a lot to his school.  When the second half against Arkansas opened with an illegal procedure by #43, it seemed a fitting indication of how bad things had gotten.

Then, as fans processed another disappointing loss, this time to Vanderbilt, word that a hip injury would end Lutzenkirchen’s career at Auburn deepened the sadness.

Lutzenkirchen’s tweet — “Sad to say it is over at Auburn. Thanks for the opportunity to play in O&B on Saturdays. It was the best decision of my life to be a Tiger.” — was an appropriately classy handoff by the popular player and sparked hundreds of replies.

Philip is a frequent presence in Tichenor Hall, as one of our majors.  He is friendly to all of the professors he encounters.  It’s one of the qualities that makes college football so special.  These are not just players who score touchdowns to make fans’ lives better.  They are our students and classmates, and we appreciate them in that regard.

He had decided to time his academic progress so that he graduated after his final season — no cursory graduate studies.  I usually represent the department at fall graduation (it’s the coolest weather, so the most comfortable for those bulky caps and gowns), and I look forward to the moment when Ric Smith announces his name as a student one last time.

I will remember another moment as well.  Soon after the semester began, as I walked from my car parked at Comer toward the Science Center, I heard a voice call: “How’s it going?”  I turned.  Philip was waving to me as he called over his shoulders.  Like I told my students, that doesn’t say as much about me as it does about Philip Lutzenkirchen.