They wanted some contact info for the visor thief (which, by the way, is apparently what they actually call him at school). Oh, and do you have any other interesting “stories behind the stories” about crazy stuff that happened at the Iron Bowl, after the Iron Bowl, through the magic of the Iron Bowl?

Is the Pope Catholic?

And so an ESPN College GameDay segment was born. There’s Hayden once again trying to return Malzahn’s “abducted” holy Iron Bowl halo–in person this time, thanks to the string-pulling power of the World Wide Leader–only to have “Coach Gus” autograph it and hand it right back to him. God works in mysterious ways. 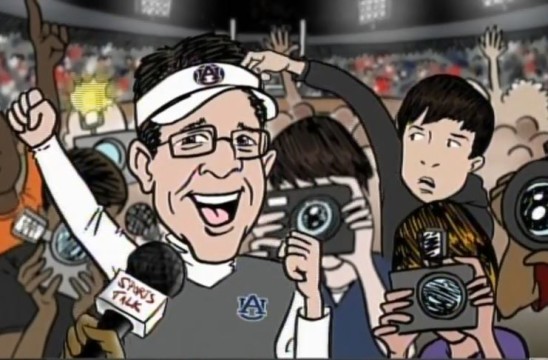 Other TWER-broken stories that made the six-minute cut: Kick Six vanity plate mania, the ashes…

Oh, and for all you Iron Bowl quake deniers out there, it’s now ESPN gospel, and by God that’s all it takes.

* VIDEO: Bear Bryant isn’t sure Bo Jackson got in the end zone for winning ’82 Iron Bowl touchdown
* Five Auburn fans named Chris Davis tell what it’s like sharing the most famous name in Iron Bowl history
* Were Auburn fans really pulling for the Russians over Alabama in 1977?
* Bama students did this to their own campus before the 1953 Iron Bowl
* Congrats, Auburn fans—you survived an earthquake
* Cremated remains found in Jordan-Hare Stadium after Iron Bowl