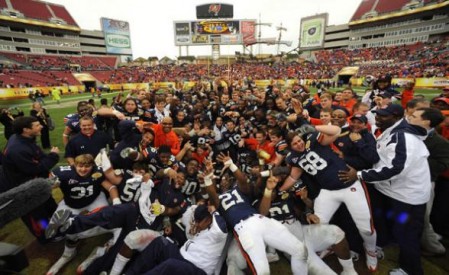 If you’re like me–and from what I’ve read in my comments section and the other Auburn-centric places around the Internets, you are–the moments immediately after Neiko Thorpe’s tackle of Zeke Markshausen on the Auburn 2 (the 2!) were seriously, seriously weird. Auburn had just won the game–the battiest, most back-and-forth, wildest and wooliest game they’ve played in years. It was on New Year’s Day. It came against a quality team. There should have been nothing but joy, the kind of pure and unbridled joy we experienced two years and a day ago when Kodi dashed into the end zone to beat Clemson.

But there wasn’t, at least not for me. For starters, the last few minutes had already conditioned us to celebrate cautiously–we all had to wait to find out if there was some new horrible pain the game could inflict. Then we could start celebrating. That pause didn’t lend itself to joy. Then there was the mountain of frustration that had built up over the course of the game, the kind of mountain that usually crumbles as soon as the game end in victory but this time … didn’t. Not quite.

For a few reasons. Like watching a warrior like Ben Tate come within an eyelash of going out with not one but two backbreaking plays that came within an eyelash of costing Auburn the game singlehandedly. Like the combination of rotten luck and questionable officiating (more on this in a sec) that had snatched the win out of Auburn’s hands at the last possible moment a half-dozen times already. Like the avalanche of penalties that showed that Chizik and Co. still have a lot of work to do in that nebulous field of “discipline” (though I don’t think you can blame the coaches for seniors who we all know know better acting the fool.) Most substantially, for me, like the fact that Auburn’s offense had once again been presented with opportunity after opportunity after gilt-freaking-edged opportunity to seize the game by the throat–just as they had against Georgia, just as they had against Alabama–and by God refused again and again to take it. Even after Thorpe had brought Markshausen, I couldn’t quite brush all that aside.

1. The Todd Van Emst photograph that heads up this post.

2. The most unbelievable statistic to come out of a game that produced any number of eye-popping numbers: Northwestern took 115 offensive snaps, and Josh Bynes, Craig Stevens, Daren Bates, and Neiko Thorpe–the same Neiko Thopre that made the game-saving play–were on the field for all 115.

115. Remember the Tide slugfest, how exhausted the guys seemed to be at the end? The Tide ran 67 plays that game, or only 58 percent as many as Northwestern ran this game. Remember the Arkansas-Kentucky 7-OT classic from 2003? Neither team topped 103 plays. For the ‘Cats to have run 115 plays is a joke. For four of Auburn’s players to be on the field for all of them is just about beyond belief. For one of those four to have his head on straight enough to realize the ‘Cats were faking the FG and his body to have enough energy in it to shrug off the block of a player much larger than him and bring down the ball-carrier … what on earth do we say about that kind of effort? What kind of reward do we offer that kind of sacrifice?

We offer the photograph, that celebration, the unbridled joy that maybe we didn’t get but they most certainly did and even more certainly deserved. Some games–the Iron Bowl, most notably–are about more than the team. They’re about the team and the fans and the Auburn community and Auburn history and a hundred other things besides. A bowl game, though, is about the players, I’d say–they’re the ones who earned the right to play it, the ones who get the reward of the week in the destination, the older ones who will never play for Auburn again.

Those players went out and played their hearts out, just as they had all season, and four of them–Bynes, Stevens, Bates, and Thorpe, it’s worth repeating the names–played 115 snaps. If they were overjoyed at the end of that game, if Chris Todd and Antonio Coleman and Andrew McCain and Tommy Trott and Jake Ricks and Walt McFadden and even Ben Tate and all the other seniors got to walk off their final college football field as winners, if those players got the reward they deserved, then that’s all that counts.

We can worry about everything else later. For now, this team and those players are winners and always will be. That’s enough.

— If that’s the Darvin Adams we get all next year, we should start pulling together some gift baskets for the All-SEC voters. Nothing that he got his hands on got dropped, no amount of early contact could lodge a ball loose, no route was run with less than total sharpness. We should have one of those baskets already ready for Trooper Taylor, who took a player with zero career catches against I-A competition and turned him into one of the most productive receivers in Auburn history.

— I know I’m going to be virtually alone in this amongst the Auburn faithful, but … I didn’t think the officials were that bad. The call of Adams’ 4th-and-4 catch was an awful botch job, certainly, and Auburn sure could have used the help from flags on the early contact plays with Adams I just mentioned, the contact with Durst, a hold here or there on Coleman or Carter that wasn’t called. But with the exception of the Adams failure-to-reverse, that’s still routine officiating stuff we’d gripe about after every game, and those kinds of calls helped Auburn as much as they hurt–witness the massive offensive PI flag against the ‘Cats that could have very easily flown on the Carr TD as well.

As for the late-game calls against Auburn–the Fairley facemask, the Kafka non-fumble, the Thorpe “batting” penalty, the Bell roughing-the-kicker call–every single one of those was the correct call. (The “batting” play looked like your garden-variety incomplete pass to me rather than a catch, but what Thorpe did was definitely illegal, and of course if he just falls on it it’s not an issue if they’d ruled it a fumble.) I wouldn’t dare call it a well-officiated game and maybe I’ll feel differently after watching it a second time, but I’ll still take those guys over the Kentucky crew.

— Todd’s line: 20-of-31, 235 yards, 1 TD, no picks. Great to see him go out by giving Auburn exactly what we wanted from him. At the same time … oh, what could have been if we’d gotten that same performance against ‘Bama.

— As maddening as the five consecutive Auburn possessions (spanning the second and third quarters) that crossed (or began) across midfield without putting a point on the board were, I think in the final tally we can’t be too upset with the Auburn offense as a whole. Remember that if you don’t count the end-of-half kneel-down or the two “possessions” in which the Auburn offense never actually saw the field (following McFadden’s pick-six and Washington’s fumble), Auburn’s offense only got 14 regulation possessions vs. 17 for Northwestern. Given the kind of field position Auburn had they should have turned those 14 into more than 28 points, but looking at that stat, the 5.9 vs. 5.4 yards-per-play advantage Auburn had, the perfect conversion rate in the red zone (at least in regulation) and the 5-to-3 turnover margin, I think you can make an argument that with the help of the NU kicker, Auburn’s offense was at least as efficient as Northwestern’s. Strange, looking at the total yardage numbers … but true.

— I know Northwestern’s DBs made a couple of great plays, but the bottom line is that Kodi put up two passes yesterday, and both got picked off. The Burnscat experiment had a couple of productive moments yesterday–the TD, another couple of productive runs (though unfortunately not the one from the 4 in OT)–but I still think we haven’t seen it repay the investment Malzahn’s put into it.

— The coaches deserve some stick for being so totally unable to play with a lead–that Auburn finished the season giving up 14-0 leads in three straight games is beyond frustrating–but it’s also worth remembering that this is now a two-year problem for this program. Of Auburn’s 12 losses in 2008 and 2009, they’ve held a second-half lead in eight of them.

— Fumble or no fumble, who else is excited for an entire season of Demond Washington returning kickoffs?

— It should tell you something about how Auburn’s recruiting has gone the past few years that on ESPN’s ticker-presented shortlist of Mel Kiper’s senior NFL prospects, Northwestern had as many players featured (three) as Auburn did. (Coleman, Tate, and McFadden were Auburn’s representatives.)

Ben Tate. Finishes his senior season fourth in the single-season yardage race and fifth in the all-time yardage record books at Auburn. Auburn. Wish his final game had gone differently, but there’s no way to shortchange that kind of a career. Hardly his fault the program around him had as many issues as it did.

Walt McFadden. As incredible as Adams was, I think McFadden’s impact–the 1-0 lead belonged to him and him alone–was even greater. He should have been the MVP.

Wes Byrum. Finished the season perfect on extra points and drove the pressure-packed OT kick smack through. If Auburn’s offense (and coaches) had given him more opportunities, he would have had a season for the ages. Hell, he did anyway.

Think about how many high points Auburn gave us in 2008. I count .5 high points–the easy victory over a decent Southern Miss team.

Now think about how many we got this year: the bludgeoning of an even more decent Miss. St. team; the shootout with West Virginia; beating Kiffykins in Knoxville; upsetting Ole Miss; playing the pants off of Alabama; and surviving the ‘Cats to win a New Year’s Day bowl game.

That is a dramatic, dramatic improvement there, I’d say. So what happens next year if Chizik and Co. increase the number of high points in anything resembling a similar fashion? We can only dream.

It’s been a hell of a year. It could have been better, sure, but still, it’s OK … because next year will be better. It can’t get here fast enough.