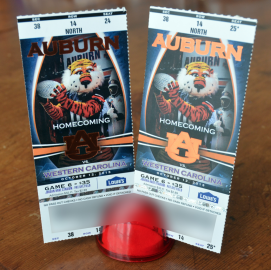 Fall wouldn’t be fall without the legendary Auburn Elvis donating some tickets for us to incentivize a contest that makes us seem totally full of ourselves.

Up for grabs: Two tickets (Sec. 38, Row 14, Seats 24-25) to Auburn’s Oct. 12 homecoming game vs. Western Carolina. But this time there are no photos to stage, no posters to design. We’re looking for testimonials from readers to use in our new media kit, just one or two lines that answer the question Why I Read The War Eagle Reader. The entry that swells our chest the most wins (but we’ll probably use even the entries that don’t, which is totally reward in itself).

Send your flattery (subject line: Why I read TWER) to [email protected], and include where you live. The deadline is midnight Monday. We’ll get the tickets in the mail Tuesday.