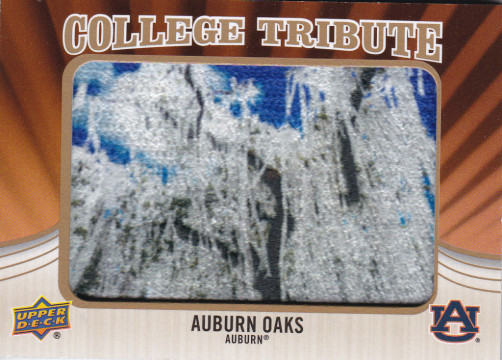 The biggest sign that this Toomer’s Oakss trading card is, in fact, a legitimate, officially licensed, actual real thing isn’t the “Auburn” instead of the “Toomer’s,” (’cause that’s important) it’s that someone has already bid it up to $61. And there are still five days left.

You are bidding on a 2013 Upper Deck Football College Mascots card of the Auburn Oaks. The card # is CM-116. Upper Deck’s checklist calls the card “Toomer’s Trees” and identifies it as one of the FIVE cards in the College Mascots Group A. According the that checklist, the odds of getting this card in a pack is 1:6,513 packs. THAT’s what I would call rare.

(That it shows up the Upper Deck blog is probably a pretty good sign, too.)