Selena Roberts brought me yeast rolls once upon a time. At least there’s a very good chance she did. Quincy’s was probably my favorite restaurant as a kid, and a trip to Auburn to visit my grandparents in the late 80s meant a trip to the Quincy’s on Opelika Road (RIP), which is where Selena told me she worked her way through Auburn as a waitress. Why Auburn? She had family at Auburn, her older cousins, and because she “fell in love with the campus.”So Selena Roberts was in love with Auburn University once upon a time.

She graduated from Auburn in 1988. She was assistant sports editor for the first half of her senior year, sports editor for the second. The two and half years she spent covering Auburn sports overlapped with a mini-golden era of Auburn football complete with mini-scandals (Brent Fullwood may or may not have been going to class, Jeff “Lil’ Herbert” Burger was going on free hunting trips and plagiarizing papers, a sports agent—”Slime Devils,” as Selena called them—found God and confessed to paying Kevin Porter) during a time when the president of the NCAA, an Auburn graduate, resident, and former Auburn president was being accused of going soft on Auburn, and when College Football Corruption was arguably at its cartoonishly cinematic height. (The first line of review of Johnny Be Good in the April 21, 1988 issue of the Plainsman: “The seedy world of college football recruiting could be a rich topic for a good movie.”)

So… what if it’s not some private vendetta? What if it’s as simple as sometimes just wanting to write what you know? Or what you think you know? What you were absolutely “you betcha” certain of that hour you first believed in the justice-wielding, program-crippling, attention-earning power of journalism?

She sees where I’m going.

“All experiences shape you, absolutely,” she says, “but I think you’re going down the same path: Auburn, as if that’s a storyline that defines me.”

Maybe it doesn’t. But if you wanted to try to psychoanalyze her career along those lines, to try to explain why Dirty Auburn seems to be, as her editor at the Plainsman put it, “a favorite subject for her,” here’s plenty of microfiched material to work with.

Here’s Selena Roberts in her own words, then and now, about her alma mater. Plus some other random stuff.

SELENA ON EVIDENCE OF EXTRA BENEFITS AT AUBURN IN THE 80S

Poor college athletes: wheeling through their own futures—April 15, 1988

“If the mothers and fathers of some of the athletes are feeling such a financial pinch, then how come their children are seen driving some of the shiny new cars lining the parking lot of Sewell Hall?

And it’s a shame the poor pitiful athlete has to wander the halls of Haley Center wearing gold chains and sporting new clothes, right down to a $70 pair of Nike Air Jordans.

Evidence of foul play? You betcha… There’s shadier stuff here than that found beneath the Oak trees in front of Samford Hall.

Of course it’s hard to prove how many athletes on this campus fall into the traps of money. For some reason, car dealers have a distaste for disclosing to who and for much they sell cars.

This is not pointing fingers or implying that all Auburn athletes take money on the side. Tracy Rocker was cleared of his involvement with Abernethy this week. And most players abide by the rules and use their talents as a way of getting ahead—in the classroom.” 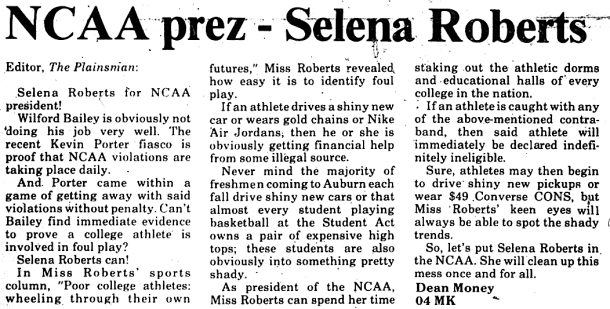 Selena: “I loved tennis and it was a way to stay close to a game I played in high school. The best part was getting to know international students who came to Auburn to play on the team. It was a great cultural experience.”

UPDATE: Kimberly Key Matthews, President of the Montgomery Auburn Club: “What happened to the Selena Roberts I knew at Auburn who loved and supported her team? We went to Vegas with the 1986 Men’s Tennis Team.”

THE BIGGEST STORY SELENA EVER COVERED FOR THE PLAINSMAN

“I don’t remember big stories — although I’m sure the Jeff Burger situation was probably one of them — as much as I remember writing features on players like James Joseph. I was very much into developing the writing part of my career, and features gave you much more leeway in being creative. I’ll say this: There were times when I probably went overboard with the prose, but that was part of growth, I suppose.”

SELENA ON WHAT GETS INK AT THE PLAINSMAN

“Throughout the last two and a half years, I’ve written about everything from those slime devils—sports agents—to the miscues of Jeff Burger. You learn quick: stories like these run on page one.”

SELENA ROBERTS OUT ON A LIMB WITH PAUL FINEBAUM

THE MOST MEMORABLE AUBURN FOOTBALL GAME SELENA ROBERTS EVER ATTENDED

“This wasn’t a game I remember covering for the Plainsman, but I’d say the most interesting and memorable game I went to was the 1988 Sugar Bowl that earned Pat Dye the Pat “Tie” nickname.”

“I will always remember the first time I asked Pat Dye a question. It was after a press conference. As I spoke, my voice squeaked like a scared little girl weakened by the God of Football.

Good gosh, I thought I was going to throw up.

Well, I don’t fear him anymore. He’s human. But, he does have an unmistakeable aura.

In person, Dye has an intimidating, cutting stare. It’s his defense against, sometimes hungry, reporters.

But I’m sure there is another side to the coach which escapes my presence.

I could have told you exactly what kind of man Dye was before I had to write about him. Now, now… I don’t know him at all.

Since I can remember, I had always longed to interview Dye about himself, not about coaching, but about who he is away from the sidelines.

Maybe the other side doesn’t exist. But, I never found. Now, I wish I had tried.”

Now: “I’m surprised by the influence he still has.”

Dye: “I don’t remember her. She must have a vendetta against Auburn, for her to have gone here and what she wrote. Maybe she has a vendetta against the time when the communication and journalism schools were made into one department. I remember that was a big deal.”

SELENA ON DRUGS IN SPORTS IN THE 80S

“Money can’t buy you happiness. But as the headlines have shown, it can buy you drugs. One more problem thrown into the sports arena. One day, I’d like to write about how sports has become drug-free (tomorrow I’m buying a house on Fantasy Island).”

“I didn’t think Selena was any different than the rest of us trying to do good work. I wouldn’t say Selena did anything different from anyone else on the Plainsman staff. No one ever came to me, or I never received any information saying she’s being unfair or inaccurate or anything like that. She was always very professional.”

“I like Selena and I’ve always liked Selena. She and I traded emails while she was at the New York Times. I haven’t spoken to her since the lacrosse thing. But I’ve always known her as very professional, and not a particularly sloppy reporter. In journalism, you’re going to make mistakes, you’re going to stub your toe. With the Duke Lacrosse thing, she stubbed her toe I guess.”

“When I was at the Plainsman and writing negative stories about stuff at Auburn, the very first thing I’d hear was ‘do you not love Auburn? What is wrong with you?’ Well, it’s because I love Auburn that I do what I do. I’m not trying to bring anybody down. I can’t bring down the institution. I can’t speak to Selena’s mindset on this but those who worked on the Plainsman and criticized Auburn got hammered for being out to get Auburn and that’s simply not the case.”

“I don’t know why Auburn is a favorite subject for her. I was talking to a friend of mine the other day, and if you didn’t know that story was about Auburn, you’d read some of the introductory stuff about ‘the storied program’ and you’d swear she was writing about Alabama, because no one ever really talks that way about Auburn.”

“Bret was a terrific editor through a lot of late nights putting the paper out. But it’s good to remember that I’ve written more than 20,000 stories in my career since leaving Auburn. The Tigers are a national power. And as most folks know, I’ve spent most of my career at national publications. So, yes, I have written about Auburn on at least three occasions that I can remember. Because I worked at The New York Times, some people associate me with stories I did not write, such as the series Pete Thamel did. Believe me, I’d say the fans at Florida State, Florida and Notre Dame would argue that I’ve spent far more time writing about their programs.”

SELENA IN THE AUBURN LOCKER ROOM

Selena: “I’d say Auburn bent over backward to accommodate me before rules for access were enforced. I’ll be forever grateful for that. Certainly, when I began, there were challenges. But over the years, with more women in the field, the burdens have diminished.” 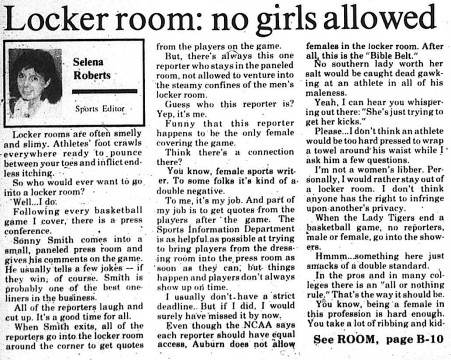 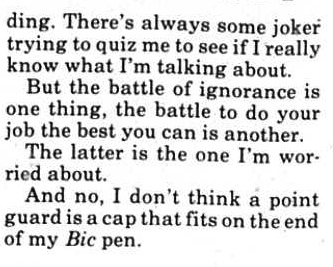 “Yes, I always say I went to Auburn to people who may not know.” 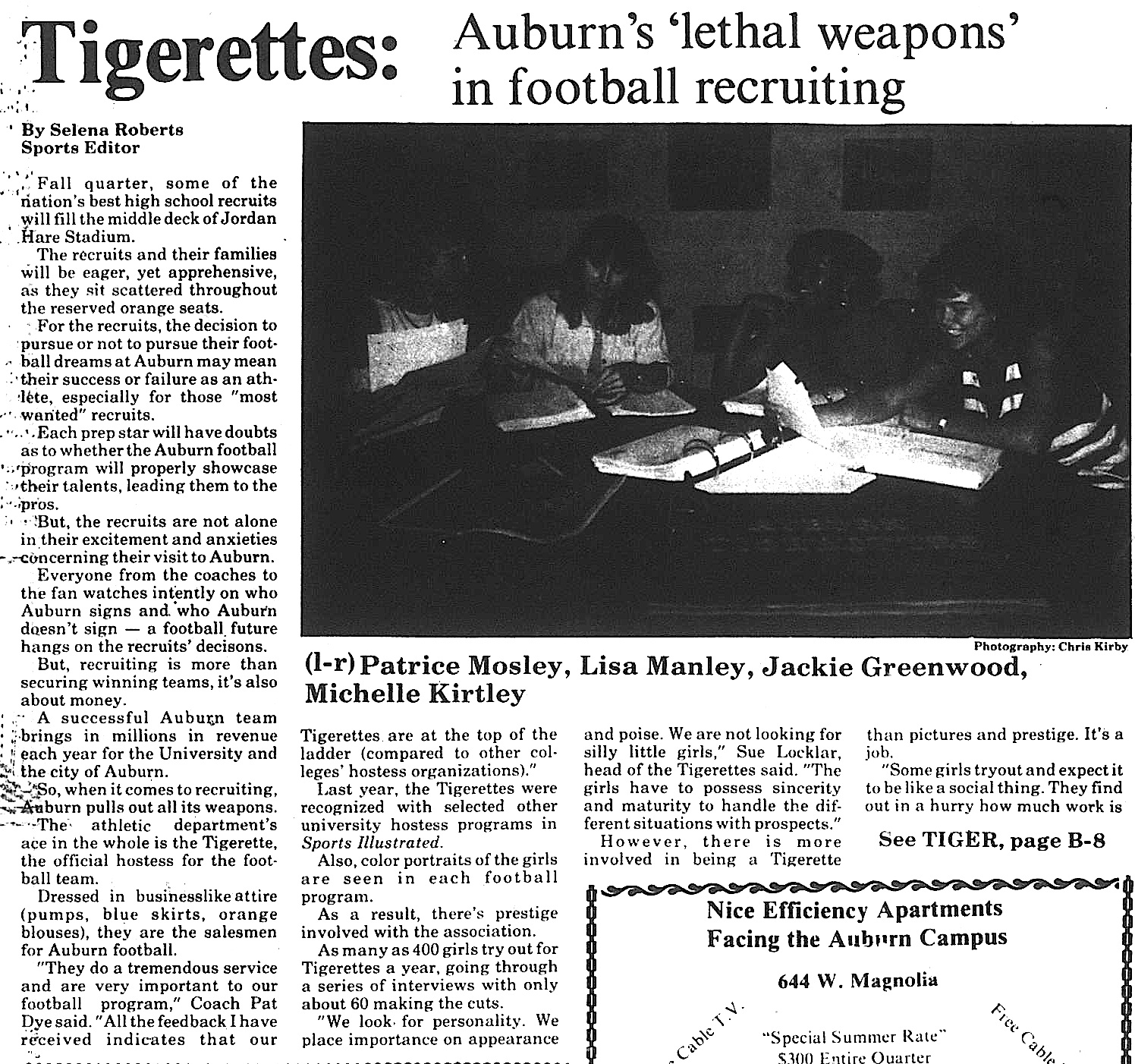 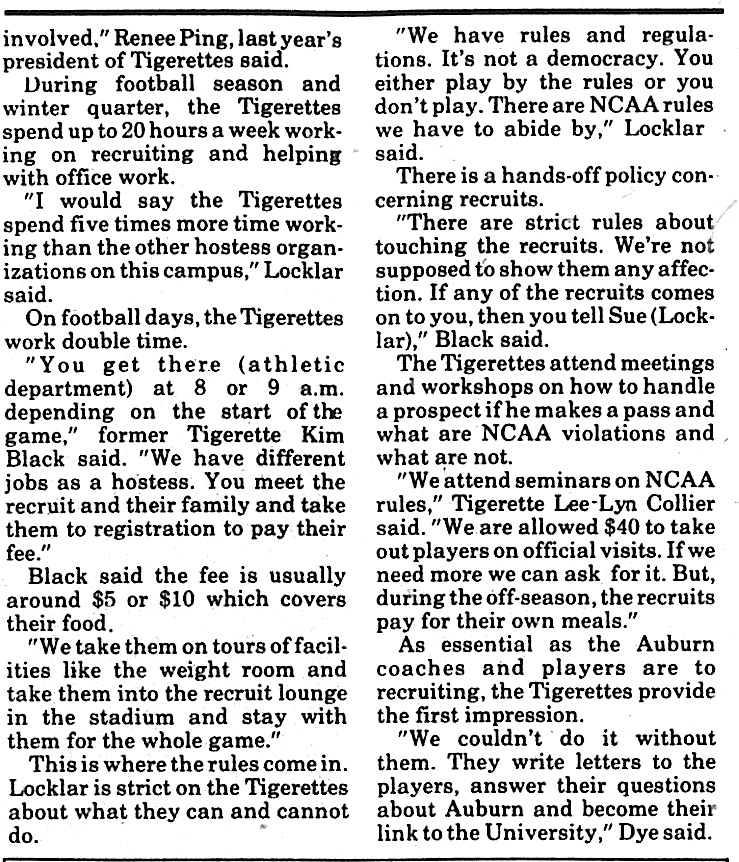 THE LAST TIME SELENA ROBERTS WAS IN AUBURN

Selena: “About three weeks ago I went to the Auburn city police station to request the police report from the armed robbery.”