A slogan on The Hound Bar & Restaurant’s website:  “Hearty Eating for the Hungry Dog.”

But the buzz about the new Auburn restaurant hasn’t come from the menu alone. The Hound’s decor features deer antler chandeliers, vintage lanterns, and original dark cedar tables in an attempt to reflect Alabama’s outdoors culture.

Located at 124 Tichenor Avenue downtown in the historic building most recently occupied by the now closed Olde Auburn Ale House, the restaurant has been an Auburn hotspot since husband and wife owners Matt Poirier and Jana Poirier, a 2004 Auburn graduate, opened it (originally as Bloodhound Bar & Restaurant) in March.

When the Poirier’s moved from California back to Auburn to be closer to Jana’s family—her parents, also Auburn grads, own a farm in LaFayette—the couple knew they wanted to open a restaurant that embodied southern hospitality. 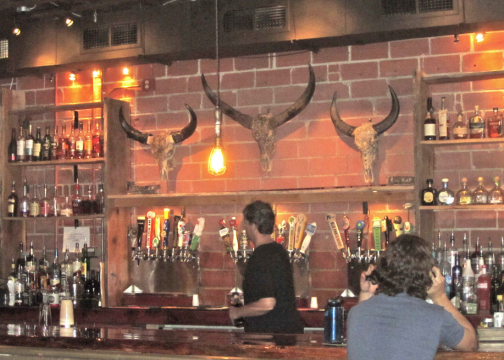 “We wanted to do something that hadn’t been done in Auburn,” Matt says. “Since Auburn has a rich tradition in agriculture and the outdoors, it seemed to really fit in with the Auburn area and the school, and we thought it would resonate with the community.”

All of the decor, including the tables, cedar bar top, and finished wooden doors, was handmade by the Poirier family from reclaimed barn wood and wood from southern cedar trees that had fallen on their property. The long, family-friendly community tables were made for their wedding in 2010.

The Hound is a popular venue for private parties and Greek social events, but has also become one Auburn’s main venues for original music.

The restaurant is open for lunch, brunch, and dinner and also has an extensive bar featuring a large selection of top shelf bourbon and 28 beers on tap.

“The greatest thing is that we’re affordable,” Matt says. “Yes, we have a $25 steak on the menu but we also have our Hound Dogs for $7 and we do two for one on Wednesdays.”

But their most popular item?

No one seems to mind the $1 mimosas on Saturday (excluding game days) and Sundays, either.