If you live in a cupboard under the stairs (or a dorm in the Village, since they’re about the same size), and you’re saving up to buy a new Nimbus 2000, there is an campus organization for you.

Melissa Darce, a junior in psychology and secretary of service for the AUrors, described the club as “Harry Potter- themed fun.”

Last year, the group hosted a charity book drive last year, Accio Books. “We want books that people have read and loved, not textbooks” said Becca Higginbotham, president of the AUrors and senior in radio, television and film.

In Spring, the Harry Potter Alliance AUrors turned the premiere of The Hunger Games into a service event called “Hunger Is Not a Game” to collect food for the Food Bank of East Alabama. The AUrors set up bins for donations outside Wynnsong 16 Cinemas and collected more than 200 pounds of canned food, according to Higginbotham. 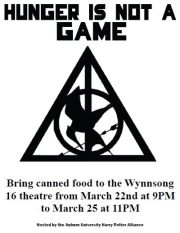 “Hunger Is Not a Game was the first big thing for us,” Darce said. “It put our name on the map, and it showed me we could really make a difference.”

This fall, the AUrors are planning a Yule Ball— “the quintessential Harry Potter thing,” according to Higginbotham. Instead of charging admission, Darce suggested guests bring a new item for Toys for Tots.

The AUrors have a “Free the Houseelves” clothing drive planned for this semester to benefit St. Vincent DePaul, a charitable Catholic organization. Darce also hopes to have a Horcrux Scavenger Hunt on campus this fall as a social event.

The group is always welcoming new members. Members are sorted into houses “like Pottermore, but Auburn themed,” Higginbotham said. Instead of answering questions like “White or black?” you might be asked “Orange or blue?” (They even keep track of house points.)

After sitting at a table on the concourse for hours during O-Days (Organization Days), Darce said, “Even if students don’t stop and sign up, they look over and see the lightning bolt and they smile.”

Related: Quidditch coming back to Auburn.