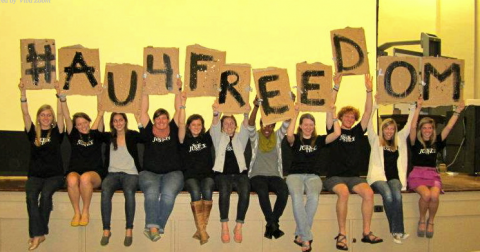 An Auburn group is among a small but growing number of college students across the country attempting to raise awareness of modern day slavery, including that which currently exists in the United States, through the non-profit organization International Justice Mission. a non-profit organization headquartered in Washington, D.C.

Headquartered in Washington, D.C., IJM’s mission includes seeking out those suffering under modern day slavery (27 million worldwide per IJM estimates), removing the individual from their situation, and assisting them with legal matters involved in the process. In 2010, four Auburn students started an IJM chapter on Auburn’s campus. Now entering it’s third year, Auburn IJM says it has seen significant progress and expects even more for this fall.

“I am excited to see what our chapter can accomplish,” says Auburn junior Sarah Kuykendall, the chapter’s president. “I know with the right determination and the ability we posses we can achieve a lot this year. I mean, we have always done well in serving IJM, but I believe we can push that farther this year.”

Though some may wonder how a group of students in Auburn can have any impact on an issue as massive as slavery, Auburn IJM says its committed to even the smallest efforts toward justice, and that when it comes to fund-raising, every little bit helps.

“There has definitely been a growth in numbers at the events and fundraisers we have been able to put together,” Kuykendall says. “There seems to be big things coming for Auburn IJM.”

Auburn IJM’s main objective is raising awareness and fundraising. This past spring, the group dedicated an entire week to educating Auburn students about modern day slavery in terms they could relate to. Kuykendall says students were surprised to learn that, according to IJM, Atlanta is of the world’s main hubs for human sex trafficking. Each day of the week featured its own event such as an educational movie night and a girl’s night, where coeds were informed about what is happening around the world to women their age.

The chapter plans to to hold another fund drive this October—“Loose Change to Loosen Chains”—to build on its success.

“It is exciting getting to see students on Auburn’s campus come together to help people. It’s refreshing to know we aren’t a generation made up of individuals who are consumed with self, but are more interested in helping others,” Kuykendall says. “That is rewarding.”