It’s always awesome, but this year they’ve added an extra dimension of realism.

Yep, that’s a firetruck outside the gingerbread version of Hargis Hall, which was damaged by fire in early October. 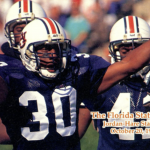