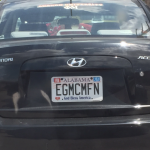 We have a new Miss Alabama. And she's an Auburn grad. And an Auburn grad student. Her name is Meg McGuffin...   ... and yes, she knows. Related: Auburn coed earns Trekkie street cred with her Toyota. If you’d like to help TWER keep on keepin’ on, click here. More fun Auburn license plate stories: * The number of Iron Bowl-referencing … END_OF_DOCUMENT_TOKEN_TO_BE_REPLACED 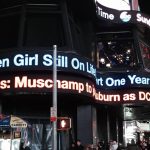 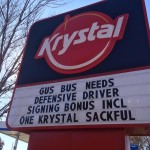 We've kept coverage of Krystal Marquee communiques mostly confined to Facebook and Twitter for the past year. But offering free burgers to entice a replacement for now former Auburn defensive coordinator Ellis Johnson seems pretty post-worthy. Maybe that's what it will take to get the right man for the job. Maybe sacks will equal sacks. "I've already told the … END_OF_DOCUMENT_TOKEN_TO_BE_REPLACED 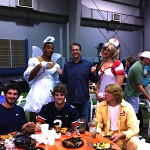 Halloween in Camelot. Just an offensive coordinator and his quarterbacks out for a night on the town. Who's it going to be, Coach? Photo: Kenzie Malzahn. Related: Kristi and Kenzie Malzahn’s recipe for the perfect Gus Malzahn costume. Do you want TWER to keep on keepin’ on? Can you spare a couple bucks? … Keep Reading: * 1892 Auburn team had to … END_OF_DOCUMENT_TOKEN_TO_BE_REPLACED 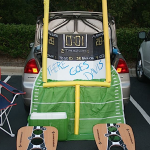 Those Trunk or Treat things at churches aren't supposed to be scary. It's at a church. You leave the bloody cleavers at home. And yet last Sunday night in Birmingham, at the Meadowbrook Baptist Church Fall Festival, young Bama fans were forced relive their worst nightmare. Meadowbrook member Liz Birdsong converted her car's trunk into a miniature Jordan-Hare Stadium, … END_OF_DOCUMENT_TOKEN_TO_BE_REPLACED