Part 2 of now-I’m-thinking-4 or 5. Hopefully. Previously: The season of what is possible. 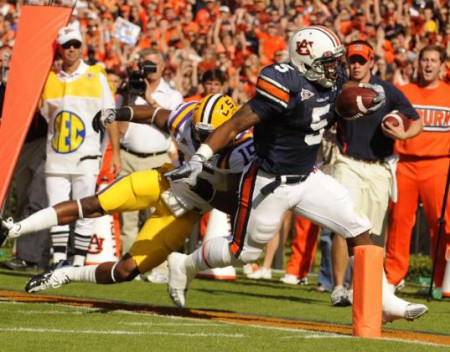 The past two preseasons I’ve devoted an entire post to each unit of the new Auburn team, but — as the old saying goes — time, day jobs, and 11-month-olds make fools of us all. So for 2011, I’m doing just two–one offense, one defense/special teams. Enjoy, please BUT FIRST:

Read the Wishbone’s official TWER 2011 Auburn preview, which does every bit as outstanding a job of running down this year’s Tigers as you’d expect them to–or as any single post could. This post should be seen as a kind of complement to that one, if it even winds up so lucky. Anyways, enjoy:

The Good: On the Laughability Scale of 1 to Danny Sheridan, “Barrett Trotter is the new Chris Todd” rates the full 10 bagmans. Todd actively studied under Malzahn for the duration of one fall camp before assuming the starter’s role. In terms of  mobility, he appeared to be the unholy offspring of Daniel Cobb and a cactus. And then the pre-chewed Hubba Bubba holding his arm together finally fell apart at midseason.

In contrast, Trotter has had three full years under Malzahn; was mobile enough to earn the “dual-threat” label from Rivals coming out of high school and average 13.6 yards on his five carries a year ago; and by all accounts has more-than-enough arm strength to do the things Malzahn’s offense needs him to do. The only time Todd and Trotter ought to be mentioned in the same sentence is to say something like “Dude, Barrett Trotter is going to be, like 28 to 27 times better than Chris Todd was.”

And seeing as Todd wasn’t half bad that 2009 season, that little equation means Trotter is going to be pretty much all good in 2011. Even if he’s not (or he gets hurt), Clint Moseley was good enough to force the coaches to wait until the last possible moment to name Trotter the starter; he’ll be fine-to-much better than fine if called on. Then there’s Kiehl Frazier, whose introduction would reopen large swaths of the Cam playbook and who might already be comfortable enough in the offense to succeed in it.

That’s a lot of good, and that’s even before we start discussing Malzahn’s track record.

The Bad: Even if he’s not of the Leard/Cobb/Cox lineage when it comes to running ability, Trotter sure as hell ain’t Cam, either. Malzahn’s not going to totally throw out the read-option section of the playbook — for heaven’s sake, he ran speed option on a semi-regular basis with Todd — but he’s probably also not going to be able to turn to it as often as he’d like.

Even more damaging, we all know there were plenty of times last year when Cam would drop back and either 1. be  snowed under 2. find no one to throw to. And then we’d blink and during the blink he’d run for 33 yards. This year, if no one’s open or the line lets a rusher through — and given the losses on both units, that’s going to happen a good bit more often than it did a year ago — Trotter’s more-than-likely getting sacked.

The Prediction: Trotter does the thing Malzahn quarterbacks do, with what issues the offense encounters largely the result of breakdowns elsewhere. Frazier begins to play the occasional change-of-pace series at midseason, making a few mistakes but also causing outbreaks of mass drooling at Jordan-Hare.

The Good: As homerrific a statement as it surely sounds to fans of other teams, it’s true: Onterrio McCalebb might be the most underrated player in the entire country. Dude averaged 8.5 yards per carry last season, the best mark of any player in the FBS with more than 60 carries (he had 95), and even Auburn fans don’t talk about him that often, it seems like.

Of course, that’s because they’re usually talking about the reigning BCS championship game MVP. And now that said MVP won’t spend the first half of the season battling for carries, shaking off an injury, and getting up to speed on the offense, he’s going to be a nightmare. I honestly don’t think there’s a better inside-outside combination of backs in the nation.

The Bad: Tre Mason has earned enough plaudits this fall that I don’t think the Auburn interior ground game is sunk in the event of a Dyer injury, but is he ready to be what Ben Tate was in ’09 or Dyer was for the second half of last year? I’m doubtful.

Also: it’s not a huge deal, I don’t think, but until we actually see LaDarious Phillips in action, I’m convinced combination H-back/TE sets aren’t an option. Who’s Eric Smith’s replacement? No one, far as I can tell.

The prediction: No one stops calling Auburn Running Back U this season.

The Good: Emory Blake and the Swede Killa, the Swede Killa and Emory Blake. You could ask for a better WR/TE combination to build your receiving corps around … but it’s hella unlikely you’d actually get one. If they don’t both make at least second-team All-SEC, I’ll be disappointed.

And neither one’s even going to be the most explosive member of the unit, an honor that ought to go to Trovon Reed. We’ve been hearing since the moment he stepped on campus that all he needed to unleash his version of elusive, untackleable hell was his health. Now he’s got it, and an offense tailor-made for it to boot.

The Bad: Nice as it should prove to be to have Reed around, Blake’s presence means we did kinda-sorta already have the role of undersized slot jitterbug accounted for. And as for who’s going to take on Darvin Adams’ role as the rangy, sure-handed go-to possession guy or Terrell Zachery’s role as the blazing 6’3″ downfield home-run threat … well, Blake is good enough to fill one of those holes whatever size he is.

But as for the other, it’s either Quindarius Carr, Deangelo Benton, or a true freshman, or bust. Which isn’t the end of the world; Carr and Benton both have the potential to have the breakout seasons we’ve been hoping for from them the past two seasons, and Trooper Taylor is still the guy who coaxed the breakouts from Adams and Zachery in the first place. But I also can’t shake the feeling that if one of those breakouts was coming, it would have announced itself with more than four total receptions a year ago.

The Prediction: Blake is awesome. Lutzenkirchen is awesome. Reed is close to awesome. But everyone else is only OK, and on third-and-long — or when Malzahn wants to look deep on second-and-whatever — that’s an issue*.

The Good: Brandon Mosley won’t suck. In fact, he should end up being legitimately good. Reese Dismukes is probably going to start as a true freshman at center, but that worked out all right for Ryan Pugh in 2007, and Pugh didn’t have the benefit of going through spring drills. Jared Cooper is old, at least. So is A.J. Greene. John Sullen and Chad Slade are huge. Greg Robinson and Christian Westerman are, without question, enormously talented. Walk-on or not, Blake Burgess has been talked about as a potential starter since his first practice.

Somewhere in there, there’s a functional line waiting to be cobbled together. Which is why Jeff Grimes has at least sounded encouraged by what he’s got to work with.

1. Auburn doesn’t have time to cobble things together. Week 2, State’s Boyd and Cox might be the best tackle pairing in the SEC. Week 3, Auburn visits a Clemson line that — tons of turnover or not — more-or-less handed last year’s line its asses. It took the 2007 team four or five weeks to figure out who needed to play where–and by that time, USF and State had already beaten us.

2. “Functional” is not the same as “good.” Against this schedule, Auburn needs good.

And to be brutally honest, I’m not sure if this line has “good” kind of upside. Jared Cooper is a fifth-year senior, but as a third-year player he was beaten out for a start by Sullen, a lightly-regarded true freshman. Now Sullen is a junior, but he’s in danger of being beaten out  at guard by Burgess, a walk-on not even playing his most natural position because he may have been beaten out by a true freshman himself. A lack of upside can be countered with experience … but none of the four players in the above daisy-chain have more than Sullen’s lone 2009 start. Greene got a couple last year; naturally, he may lose the right tackle spot to Slade.

Prediction: Look, the line’s not going to be an embarrassment. It very likely won’t even be substandard; Grimes knows what he’s doing, Malzahn plays to his line’s strengths, and for all the inexperience there’s a nice mix of veterans (who have years in the scheme, if not in the lineup) and talented youngsters. And hell, Auburn has a long and distinguished tradition of overachieving in years when the line is expected to be a weakness. It’s going to be OK, at worst.

But I just don’t see enough combined potential/experience to think it won’t have kinks — maybe major ones — to work out coming out of the gate. Late in the year, when (I expect) Westerman and Robinson will have earned starting nods and things have started to come together, the line will look more like what we’ve become accustomed to–much as the rise of Ziemba, Pugh, and (sigh) Ramsey did in 2007. But there’s going to be some bumps along the way.

*Outside receiver is maybe the only area where Chizik and Co.’s recruiting just hasn’t worked out. Benton has seven receptions in two seasons to-date; Jeremy Richardson didn’t qualify; Shaun Kitchens and Antonio Goodwin thought armed robbery sounded fun. Going a potential 0-for-4 — Benton pending — at the same position over two years is going to leave a mark.

* Playboy Playmate sneaked into Jordan-Hare by Pike Pledge
* The Auburn soccer player with the “GREAT future BEHIND her”
* Playboy in Auburn, 1989
* Auburn fan shot dead in Alabama fan rap video
* Shug Jordan dug the heck out of houndstooth
* War Eagle Moment from space scheduled for October 25
* “War Eagle” carved into face of the Spinx
* Did an Auburn fan contribute to the teenage delinquency of Courtney Love?
* The G.I. Joe from Auburn