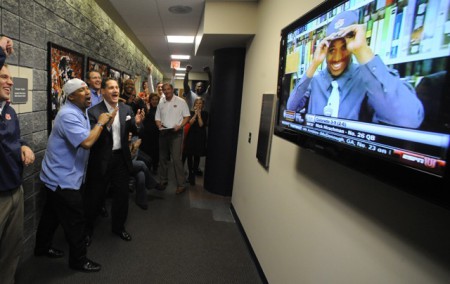 The smartest thing yet written about the Gene Chizik era of Auburn football wasn’t penned by one of the Tiger beat writers, newspaper or paysite. It wasn’t written by a national pundit descending to opine on the surprising fight shown in the 2009 team, or the endless bounty of wonders given us by the 2010 Tigers. As much as I love the many, many fine regular bloggers that make up the blAUgosphere, it didn’t spring from one of their keyboards, either. And it sure as hell wasn’t written by me.

But it did appear on this very site. Its author was Dean Jolley, our resident Auburn professor of philosophy (both football and other), who in the wake of that wretched 21-14 loss to Kentucky in October 2009 — and the howls from an Auburn fanbase that might not have expected championships just yet, but also wasn’t expecting that — wrote this:

The last half of this season may be difficult. But Auburn fans need not to ask, What have you done for me lately? But rather, What have you shown me is possible?

What have you shown me is possible? Anything. With just a little more time, a little more talent, a little more experience … with this coaching staff, anything at all. And some 15 months after that loss to Kentucky, I watched them take the field in Glendale and prove it.

I’ve thought a lot about that passage since then. Some in that game’s immediate aftermath, because of its prescience. But even moreso over the summer, as we’ve been forcibly drawn further and further away from the triumph of 2010 and closer and closer to the uncertainty of 2011.

In that uncertainty, there are questions. But I’ve concluded that Dr.  Jolley’s is the only one that really, really matters this season. What will you show me is possible?

Now we know all of that. The question remains, though. This time, it’s not for Auburn’s coaches. It’s for their players.

Sure, there’s some things we know about them. We know Nosa Eguae and Corey Lemonier are going to make third-and-long hell for Auburn’s opponents. We know Michael Dyer and Onterrio McCalebb are going to take every yard their blocking offers them and then some. We know someone out of a group with as much potential as T’Sharvan Bell, Demetruce McNeal, Chris Davis, Erique Florence, Jonathon Mincy, and even Neiko “probably should have always been a safety” Thorpe will emerge as an honest-to-God anchor. And I would daresay we know that a quarterback who has studied under Gus Malzahn for three years and will be running Gus Malzahn’s offense under Gus Malzahn will be plenty productive enough.

But the other things we know about them are much less encouraging. We know that a defensive line featuring four starting sophomores — and a four-tackle rotation wielding zero third-year players — is not the standard recipe for run-stopping success. We know that replacing Ziemba-Berry-Pugh-Isom with anyone would be difficult, but replacing them with a hodepodge of unassuming veterans, true freshmen, and even the occasional walk-on (hey, Blake Burgess) could be brutal. We know that even the combination of Emory Blake and the Swede Killa* won’t yield a productive, steady receiving corps if they don’t get help we don’t know is coming.

In short … look, we know that teams this young don’t win championships. They just don’t. And we ought to know (though I know many Auburn fans do not**) that teams this young facing a schedule this mind-bogglingly loaded will be doing very well to win seven games–especially when the coinflips that came up Tiger’s-heads so many times in 2010 inevitably come up tails in 2011.

What don’t we know? What is possible. I hope and hope fervently — of course — that when this 2011 Auburn season is done, what they will have done for us in the win column lately far exceeds my (somewhat dampened) expectations. But if they don’t, will it matter?

Not if they raise the expectations for 2012 to where I believe they will, it won’t. Let Trovon Reed and Quan Bray drop the occasional pass, even fumble the occasional punt return; if they show off the quickness and elusiveness that will break the games that matter, OK. Let Christian Westerman and Greg Robinson miss a blocking assignment here and there; if they also prove they have, as rumored, inherited Lee Ziemba’s mantle of toughness and intensity, OK. Let the center of our run defense cave from time to time; if Jeffrey Whitaker, Kenneth Carter and Jake Holland show us it will not be so easy to cave them the next time, OK***.

And so on, through Mason, and Dismukes, and Benton, and Davis, and Bates, and Wright, and McNeal, and that Trotter kid, and all the others whose careers I wait to greet the way I did the puppy Mom said she’d pick up at the shelter. It’s true: I am every bit as stupid-giddy today about next Saturday as I was about last year’s next Saturday on last year’s today.

There are seasons of what will be done for us lately. 2010 was one of them, and what Auburn did for us was glorious.

2011 is not. This is a season of what is possible. Whatever struggles they find in the present, if our Tigers repeat those exhilarating flashes of 2009 — as I know in my gut of guts they shall — their future should thrill us all regardless.

Auburn football returns a week from today. Show us your possibilities, Tigers. We believe they are endless. War Eagle. 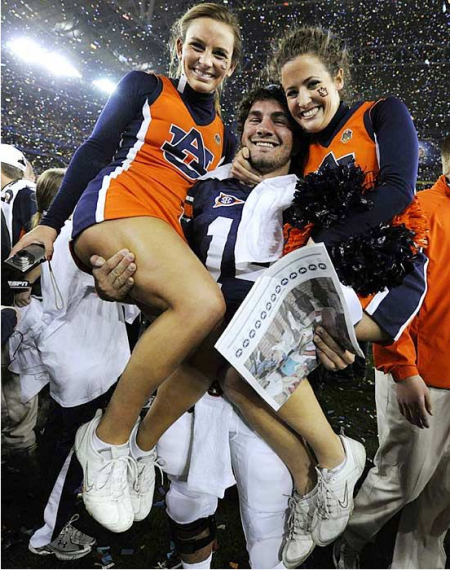 **This is not unique to Auburn fans, of course; look at the bounty of Tide fans that expected another national title last year despite the near-universal turnover on the defense, even as many predicted that the loss of Chris Todd, Ben Tate, and Antonio Coleman would equal disappointment for Auburn. And now many Tiger fans will point to the loss of McElroy, Ingram, and Jones as devastating for the Tide while casually brushing aside Auburn’s departed personnel as, ultimately, replaceable. The lesson: inexperience is disastrous for our rivals. Good thing it’s meaningless for us!

***Management reserves the right to invalidate Offer of Understanding during live competition and/or for any offenses incurred during the Iron Bowl.