On Nov. 17, 1981, the Tuesday morning following Auburn’s loss to Georgia, freshman football players Alan Manley and Cary Condray were killed instantly in a head-on collision with a diesel tanker truck between Marianna, Fla. and Panama City. The driver of the tanker suffered minor injuries.

Manley, a 6’4, 255-pound offensive lineman from Albany, Ga., was Pat Dye’s first signee as Auburn’s head coach. Both he and Condray, a 5″11, 175-pound running back from Erwin High School in Birmingham, were on Auburn’s junior varsity squad, but Manley had seen varsity action.

“Evidently they decided to drive to the beach for part of the day,” Dye told the Albany Herald. “They would have to have been back for football practice in the afternoon. Neither of them had ever missed a practice before or even been late.”

“This is a tremendous shock to everyone associated with Auburn football. Both Alan and Cary were fine people, good, solid people. They were loved by their coaches and teammates.” 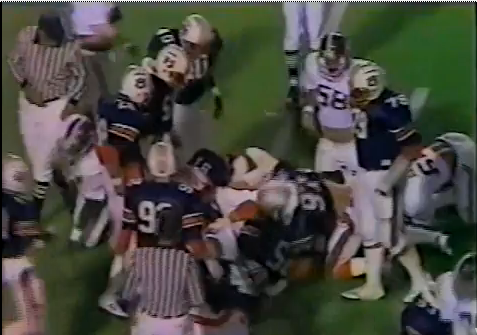 Auburn players wore a single strip of black tape on both sides of their helmets against Alabama in the Iron Bowl two weeks later in tribute to Manley and Condray.