Tenth in WBE’s season preview series. Previously, the offense: QBs, RBs, the OL, and WRs. The defense: the DL, LBs. The special teams. Also: expectations, and the SEC.

Man, I don’t know. Seriously, I don’t. Here’s a picture a friend of mine made of some Boston terriers preparing to travel to space: 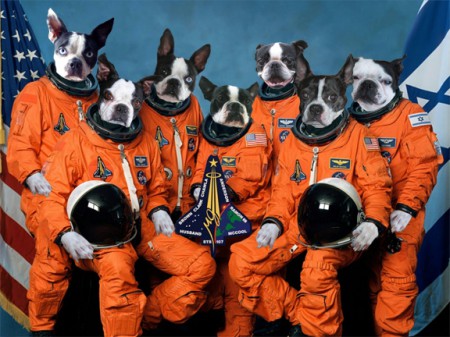 I feel like I’d be more comfortable discussing the fate of a crew of space shuttle terriers than I would be the fate of Auburn’s 2010 secondary.

This is not because I’m pessimistic about it. Really. It’s just that I feel like there’s nothing certain about the unit, no way on earth of making a prediction that wasn’t more than a poorly-educated guess. Like, dropped-out-in-eighth-grade educated. That kind of guess. They could be the best secondary in the SEC, top-10 in the country, and I wouldn’t blink an eye. They could be an open, gaping wound yielding yards and points to any upright quarterback and ambulant set of wideouts they faced, and I’d say “well, it’s not like we couldn’t have seen this coming.”

We’ll take it one member of the starting unit at a time:

Thorpe: There’s a reason Mel Kiper said the former Mr. Lipscomb was the No. 1 NFL prospect on the team; he’s got professional-grade size, the speed to match, a ceiling higher than any of his upperclassman defensive teammates save maaaaaaaybe Fairley. And his freshman season, he looked well on his way to hitting that ceiling sooner rather than later, playing outstanding man coverage on the perpetual island the 2008 injury ravages required.

But then there was last year, when Thorpe was a frequent coverage liability–there’s no other way to say it–and seemed to lose some of the hard-hitting aggressiveness that made us notice him the very first time he stepped on the field vs. UL-Monroe. He wasn’t bad, but he was worse than he’d been the year before, when the leap between freshman and sophomore year is supposed to be the biggest one of a football player takes their entire college career.

And now he’s Auburn’s clearcut No. 1 corner. If he’s better than his freshman year–he was terrific in the Outback Bowl and it’s not he doesn’t have the talent–he’ll be All-SEC. If he’s still the same player he was a year ago, without McFadden to handle the top guys, he’s going to get torched.

Washington: On the positive side: Washington started last season as the nickelback despite spending the first part of camp on offense, and despite a few glitches here and there, had proven reliable enough that when the Etheridge crisis hit, he got the call over Slade, Cole, et al. And frankly, he didn’t do too badly with it, doing his part in the UP YOURS effort against Alabama and not embarrassing himself against Georgia. With an entire year of preparation back at corner and his JUCO adjustment year behind him, we’ve got big things in store this year, right? Phillip Marshall thinks so–he’s predicted Washington would be All-SEC.

But for all of that, Washington didn’t exactly set the world on fire year ago, either. Size isn’t a major issue for corners, but at 5’9″, there could be some matchup problems. We still don’t really know what he’s going to do as an every-down corner.

For all of that, Washington is probably the smallest question mark of the four starters. I have a hard time seeing him be an outright weak spot, and think there’s a lot more upside than downside. But there’s still a wide, wide range of outcomes.

No one outside of Auburn’s coaches and players have any idea what Savage is going to do this season until we see him on the field Saturday. It’s encouraging that no one other than the coaches themselves could know more about playing safety that Savage surely does by now, that Savage has said he’s fully healthy and was a legitimate force at times before his injuries, and–most of all–that he’s been at the very top of the safety pecking order since the day spring camp broke.

But it’s also been three years since he played a down of college football, and you don’t shake that kind of rust off easily, if you ever do. (Ask Deangelo Benton how his one year away from the sport helped him.) And even if the rust is gone, are the injuries? They should have just assigned him ? for a number.

Etheridge: Well, this is the one guy who we know will bring it if he’s healthy. He’s also the guy whose injury was the most frightening, is probably the most difficult to recover from from a mental standpoint (would you want to go around smashing people face-first if you’d spent two months in a neck brace last winter?), and has kept him out of full-speed scrimmage action the longest. He’ll probably be fine once we get into the heart of the season, but to kick things off, again, I don’t see how you make an informed prediction about how well he’s going to respond.

But maybe the second string will bring some stability? There is T’Sharvan Bell, whose development from redshirt freshman to occasional safety cameo to major contributor against Northwestern to “penciled-in starter” according to Chizik suggests he’s fully ready to see the field. Though seeing more snaps than he’s seen yet could expose him from time to time, Bell should be fine as the nickel.

But other than him … Mike McNeil is yet another injury enigma. Ikeem Means is a sophomore walk-on. The battle for dimeback is between a pair of true freshmen, one of which is a converted quarterback. And almost by definition, things always get murkier and less predictable once you turn to the bench.

So your guess is every bit as good as mine this time. But here’s mine anyway: that we end up somewhere between the two poles, more towards the “disappointing” end as the season begins and the safeties get their feet underneath them, more towards the “awesome” end as the season progresses and guys like Bell, Washington, Savage, and Etheridge fully acclimate to the level of play and the amount of time they’re seeing on the field. Good things will happen for this unit … but just not right away.

I guess I sort of just made it, but I’ll call for one of Etheridge or Savage to make All-SEC, for Washington to lead the team in interceptions, for Davis to eventually win the dimeback job, and for Thorpe to return to being good again … but fall short of being great.