Not sure how we missed this, but a few months back, Gene Chizik fed a cow. But not just any cow — cow No. 106, aka “Miss Gena,” one of the latest additions to the College of Veterinary Medicine’s dairy herd, which (so we’re told) came from a litter of calves named entirely after players and coaches on Auburn’s 2010 national championship team. Chizik was informed of the honor during a CVM PowerPoint presentation he attended in February.

“There is no place like Auburn,” Chizik said. “The passion, the tradition, and the pride. And the reason is because of you – the students, the fans, the family. And that’s without you naming a cow after me!”

Thankfully, coach was considerate enough to remove his trademark leather jacket for the ceremonial feeding (though we suppose it could have helped in avoiding nipple confusion). 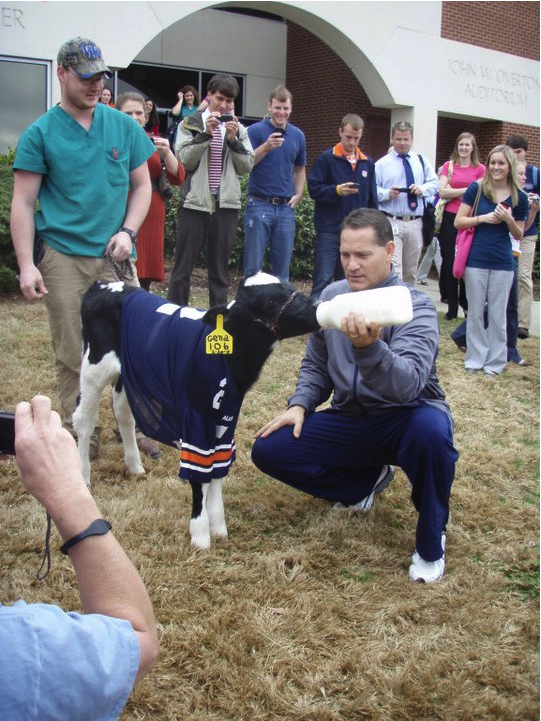 The Vet School asks that you avoid purchasing any knock-off Miss Gena merchandise, including jerseys, as doing so could possibly affect her milk producing eligibility.

* Happy Gene Chizik Day!
* Jackie Sherrill accuses Auburn of inflating footballs with helium
* Barrett Trotter knows when to hold’em
* Bear Bryant’s lost year at Auburn
* Classic punxploitation flick features broadcast of Auburn game
* Auburn students stand in for Joaquin Phoenix, stars of Space Camp (1985)
* The G.I. Joe from Auburn
* Videographer behind AU hype videos wasn’t initially sold on “All I Do is Win”
* Two campy degrees of separation between Auburn and Swamp Thing
* I Survived the Kopper Kettle Explosion and all I got was this t-shirt