Winter’s Bone was that one movie I kept trying to get around to last year, I just never found the time.  But watching all the clips from it during the Oscar’s ceremony Sunday night — it was up for Best Picture — convinced me to step up my game.  So I rented it and enjoyed a first-rate flick about a young girl going it alone against some nasty odds and nasty people in order to right a wrong against her father.  (It was a nice companion piece, with a somewhat similar narrative, to my favorite flick of the year, True Grit.)

But, of course, that’s not what I’m writing about, not for TWER.  I’m writing about yet another random piece of orange and blue flair, flaunted from time to time by Providence just to let us know that all is right with the world. You’ve no doubt heard the old saw about good things coming in three’s.  Well, three things in one scene of Winter’s Bone made me smile to beat the band.

Early in the movie, the young protagonist goes to a friend’s house to try and borrow the friend’s husband’s truck so she can do a little sleuthing.  When she enters the house, there’s some good sludgy metal playing over the husband’s stereo.  Big Sexy likes sludgy metal.  Also, the dude is apparently getting geared up for a little dirt-biking.  Big Sexy likes motorcycles.  And, lo and behold, for the third charm on this little cinematic bracelet, there’s a “22-14” Auburn novelty license plate on the bedroom wall. Big Sexy likes Auburn football (especially Iron Bowls from undefeated seasons). 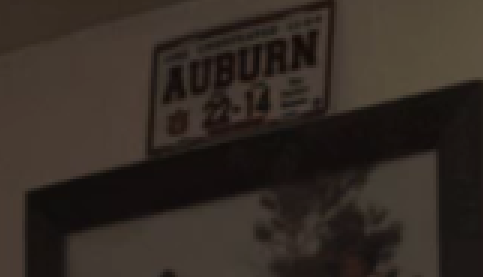 Now why would this Auburn ornament from 1993 be hung in the bedroom of a home in the Missouri Ozarks?  Who knows. But I like to think that this was an easy way to indicate that this was one of the more successful families in the community, what with them owning trucks, stereos, and motorcycles and all (compared to the Crimson Tide-ish meth addicts and tree poisoners living 12 to a shack in the rest of the neighborhood).  But, whatever the reason was, it was good.