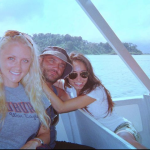 Krista Klumpp may have only made it to Day 13 of the fantastic "Survivor: Redemption Island," and her raucous, head Auburn cheerleader worthy "War Eagles!" and "Bodda Getta Bahs!" might not have made it on air, but as these photos she's proudly provided us show, the Columbia, S.C. pharmaceutical rep was by God reppin' Auburn behind the scenes, and to Nicaragua at … END_OF_DOCUMENT_TOKEN_TO_BE_REPLACED

The contestant occupying "that curious corner of male fan psychology" having been wrongfully evicted two episodes back, it's going to be hard for the Auburn fan to continue caring about "Survivor: Redemption Island." Screen-capping a bikini-clad former Auburn cheerleader fighting for cash in the Nicaraguan jungle was one of the highlights of our week; no longer. But we … END_OF_DOCUMENT_TOKEN_TO_BE_REPLACED 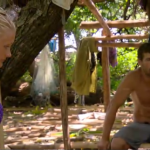 All girls are prettier without makeup, and former Auburn cheerleaders in bikinis having to fight even harder for survival in the Nicaraguan jungle now that their biggest ally, supposedly one of reality television's most infamous villains, has been banished from Redemption Island via domino duel are no exception*. So, yeah, if you're an Auburn fan, and you've really never … END_OF_DOCUMENT_TOKEN_TO_BE_REPLACED 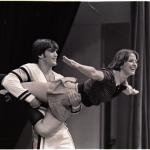 We always thought Krista Klumpp looked familiar, and when we found out her mother had also cheered for Auburn we knew why. Blanche Riggs, a former head cheerleader for Auburn in the late 70s, was one of those closest to the blast of fellow cheerleader Dana Barnes' reaction to being named Miss Homecoming in 1977. How she survived, we'll never know. That's Blanche there, … END_OF_DOCUMENT_TOKEN_TO_BE_REPLACED