After two years, we’ve finally stumbled upon photographic proof of the beast’s existence.

And the Plainsman was right—fella looks a little scrawny (still, why so harsh?!). 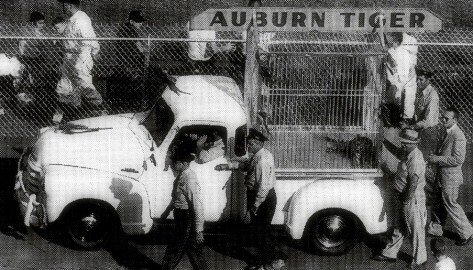 Though there was real talk of him getting a recurring gig, we thought there was a good chance his only appearance was at the 1957 Iron Bowl, as he’d bailed on the ’58 Iron Bowl parade (and you just get the feeling from reading the old clippings that they only trotted him out for the BIG big game). But unless there was a mix up in date of this old Birmingham News photo, here he is keeping it chill at Legion Field at some point in 1958.

You can learn more about this fascinating creature here and here.

Related: My Wife Was The Auburn Tiger.