Last week we delivered an assortment of classic Auburn paraphernalia, from orange jerseys and sheet music to playing cards and rugs. While we have more of that good ol’ old stuff below, we’d like to lead off with an item that exemplifies what we said last week in our call for submissions: It doesn’t have to be old to be awesome. And anything that reminds us of “The Streak” is awesome. 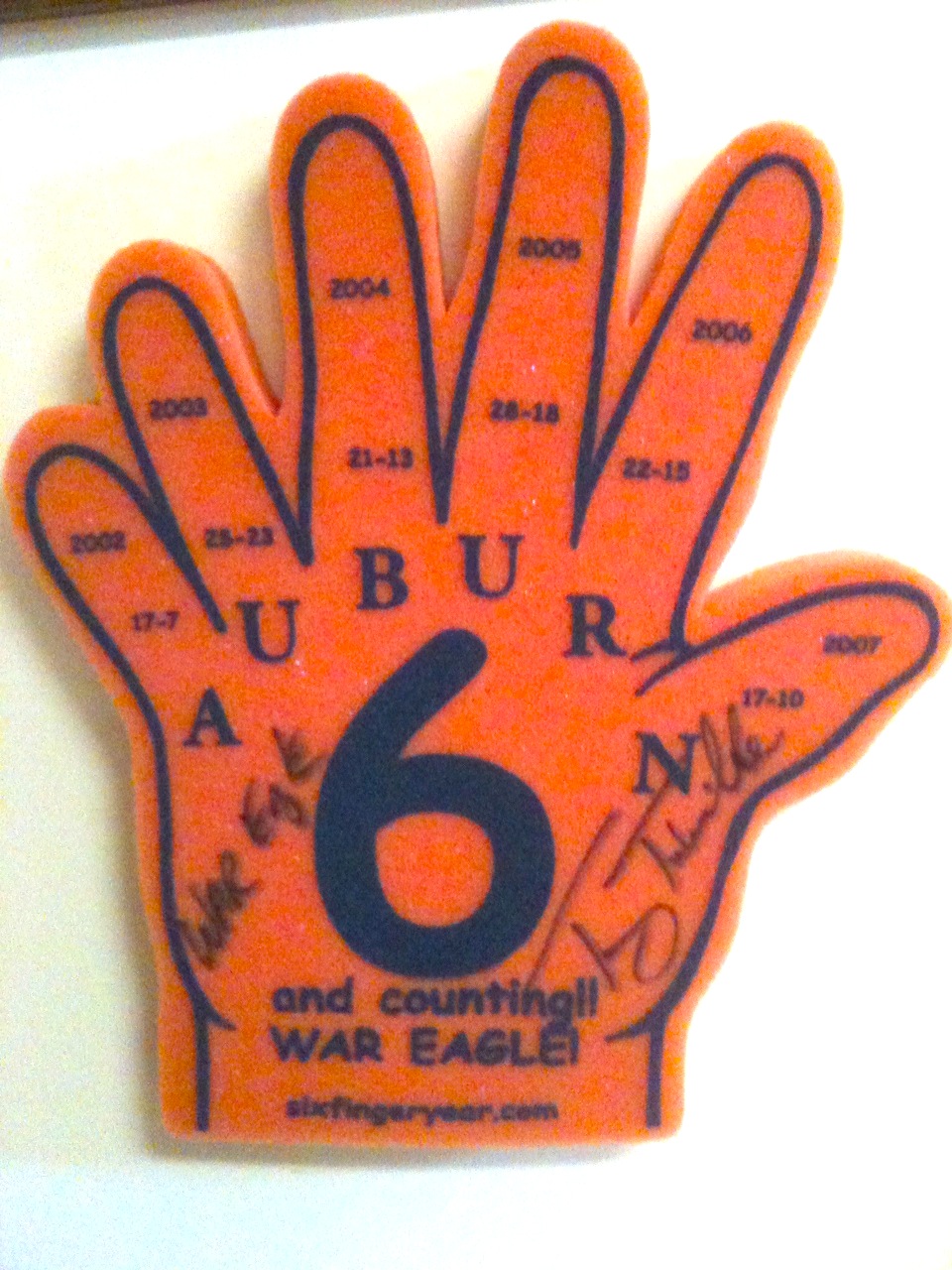 “This was an idea a former Auburn roommate and I came up with during the streak. We had these 6 finger foam hands made up, with the score of the Bama game on each finger for each year of the streak. We set up a website, www.sixfingeryear.com, to sell them. We also sold them at Alumni Club Kickoff Rallies in Montgomery, Atlanta, and Birmingham. We sent one to Scott Van Pelt of ESPN, who stuck it up on his mic stand during his TV show. We had a friend take one to China and pose with it in various places for pictures. We gave some to Tommy Tuberville (our inspiration for the idea) at the Birmingham club kickoff, and he autographed a couple for us. We actually gave one to President Gogue at the Atlanta club kickoff rally. We were selling some, not a ton, but having a great time.

Then came “the letter.” We got sued by the University for using “Auburn” and “War Eagle.” Big mistake, because I think they would’ve been fine without that. Everybody (except the alums at the Atlanta club kickoff, who only worry about the Georgia game) knew what it was all about. Anyway, we had to cease and desist. We (actually my roommate) went to court and fought, but you know how that came out. No damages were awarded, but it put an end to the business (well, along with the debacle in Tuscaloosa during the 2008 season).”

– The Six (Foam) Fingered Man (who would prefer to remain anonymous)

When the pictures of these six-fingered foam hands showed up in my inbox it brought back great memories of that wonderful run from 2002 to 2007 that was among the greatest ever to be an Auburn fan. Great players (Cadillac Williams, Ronnie Brown, Karlos Dansby, Junior Rosegreen, and on and on…) and great seasons were major reasons, but those have never been in short supply on The Plains. “The Streak,” the six straight victories over Alabama, was something we had never experienced before.  I don’t care that they were “down” after probation or that they had inept coaching (typical excuses)—it was a glorious run. I understand the university protecting its copyrights, but you have to know deep down the higher ups got a good chuckle out of the idea. At least Aubie and Tommy Tuberville appeared to enjoy them. 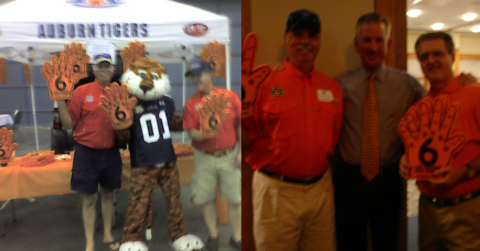 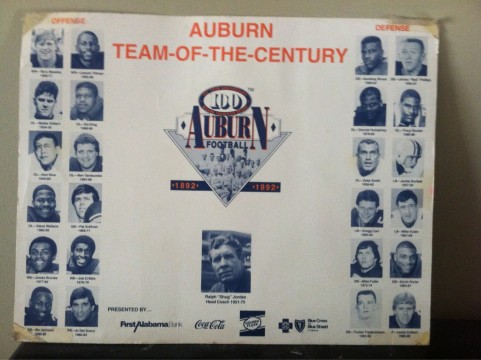 “It’s taken a beating from so many moves over the years but this is still my favorite Auburn piece.”

I remember a friend having this poster in his room when I got to Auburn in ’95 and studying the names of past greats to better acquaint myself with the team’s history. As a first generation Tiger, many names were completely new to me. Now I marvel at the collection of talent that has played for our school and how familiar the names have become. 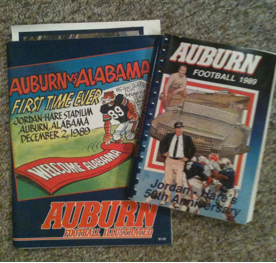 “Auburn’s 1989 Media Guide and program for The Game! Won’t ever forget the excitement and electricity! WDE!”

A media guide from Jordan-Hare’s 50th anniversary and a program for one of the most, if not THE most, important games ever played at Auburn make this a strong one-two punch of prized possessions. 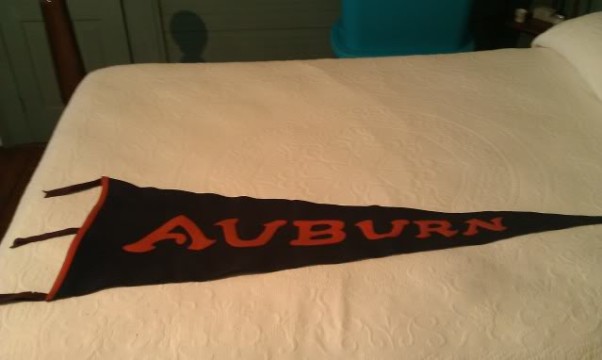 “My father’s when he was an early teenager.”

I’m a sucker for a good pennant. My room was lined with them when I was a kid, but I never had one like this classic Auburn pennant from the late 1940’s. Love it. 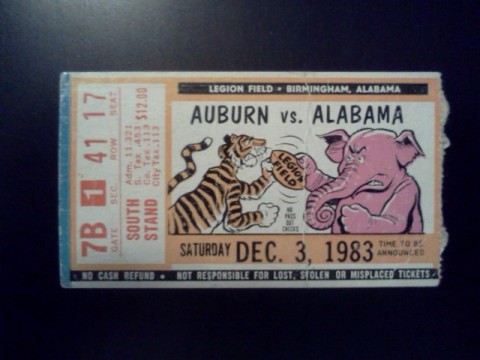 “My most prized possession.”

Here we have a ticket stub from a game in which Auburn defeated its arch rival for the second straight season (Fear the Middle Finger!) to cap off a 10-1 regular season. Yeah, that’s worth holding onto forever. I’m also partial to anything that involves cartoon mascots fighting. 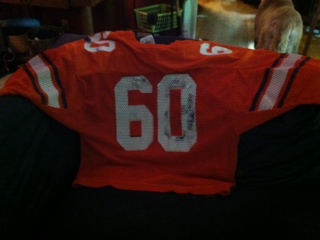 Alyson keeps our streak alive with the No. 60 orange jersey [No. 96 is here, No. 90 here], bringing us one step closer in our goal of tracking down every orange Auburn jersey ever.

Thanks again to our contributors and readers. This wouldn’t what it is without you all. And remember, the next time you come across something worth sharing, snap a picture and send it to me at [email protected] or tweet them to me at @FearlessandTrue.

You can find previous installments of War Eagle Relics here.