My original intention was to make this a weekly feature, but I’m starting to get a backlog of cool stuff that I want to share so we’ve decided to post a bonus Relics this week. We’ll start with some vocal calisthenics. 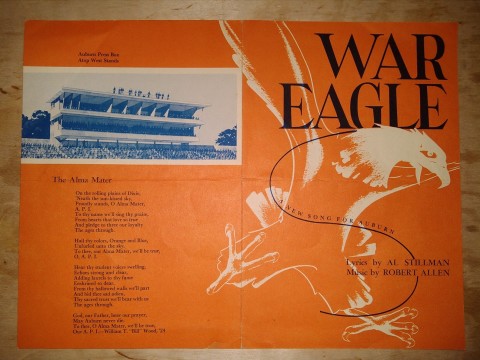 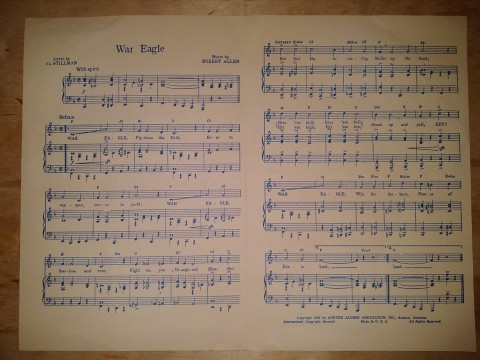 “I meant to send this to Jeremy a long time ago, but almost forgot till I saw your article. I found this in a piano bench at my great grandparents’ house; “War Eagle” A New Song For Auburn, Circa 1955. So glad you are helping bring some of these treasures to light. War Eagle.”

This sheet music dates back to the year the Auburn fight song that still fills our stadiums and arenas (and hearts) today was first written and performed. I can read music about as well as Alabama fans count National Championships, but I love the direction to play the song “With Spirit.” Also worth noting is the lyrics to the Alma Mater on the bottom left of the top photo. These are the original lyrics for the song when the school was still API. The song was revised to account for the school’s name change in 1960. And Ben, as long as there are people like you willing to share treasures like this for us to bring to light, we will gladly continue to do so. 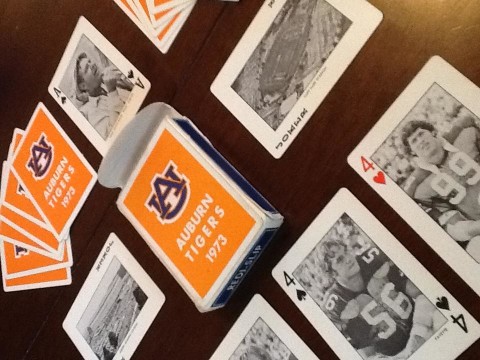 “I’ve attached a couple of pics of some Auburn playing cards featuring players and coaches on the 1973 football team. I’m not exactly sure where I got this deck, especially since I wasn’t born for another year, but I’m pretty sure it was given to me by/stolen from my older brother.  I love how the Jokers are images of Cliff Hare Stadium and a state-of-the-art Beard Eaves Coliseum.”

Whether your game is poker or “Go Fish,” this deck of playing cards from the 1973 season would give you hours of entertainment and an Auburn history lesson to boot. I will now forever think of Shug Jordan when I hear Motorhead’s classic “Ace of Spades,” as I’m sure he would have wanted. “State-of-the-art Beard Eaves Coliseum” is also a phrase I never thought I would read. 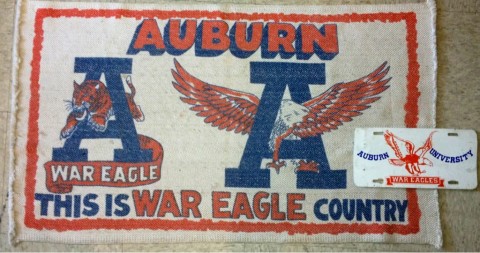 “My grandma found the rug in an estate sale & the AU “War Eagles” plate was in a thrift store for $.25.”

Of all the items that have been sent in since starting War Eagle Relics, this rug might be the one I covet the most (and, of course, Jeremy has it, too). It would just look so good in any Auburn home, what with those two amazing logos together in one place and the bold declaration that “THIS IS WAR EAGLE COUNTRY.” Might have to monitor eBay for a while. The license plate is a nice touch as well (and a steal at that price), even if it does erroneously add an “S” to War Eagle (a pet peeve of mine). 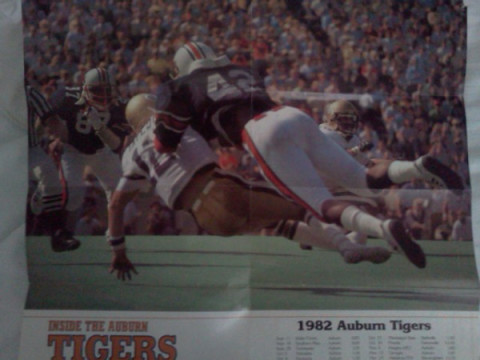 This schedule poster for the ’82 season features a diving Auburn defender (possibly linebacker Jeff Jackson) getting his human touch on as he takes out Georgia Tech’s quarterback. The ’82 team would finish 9-3 with a final AP ranking of 14. It was also the year of “Bo Over the Top” and the end of the streak, making this poster well worth holding onto. 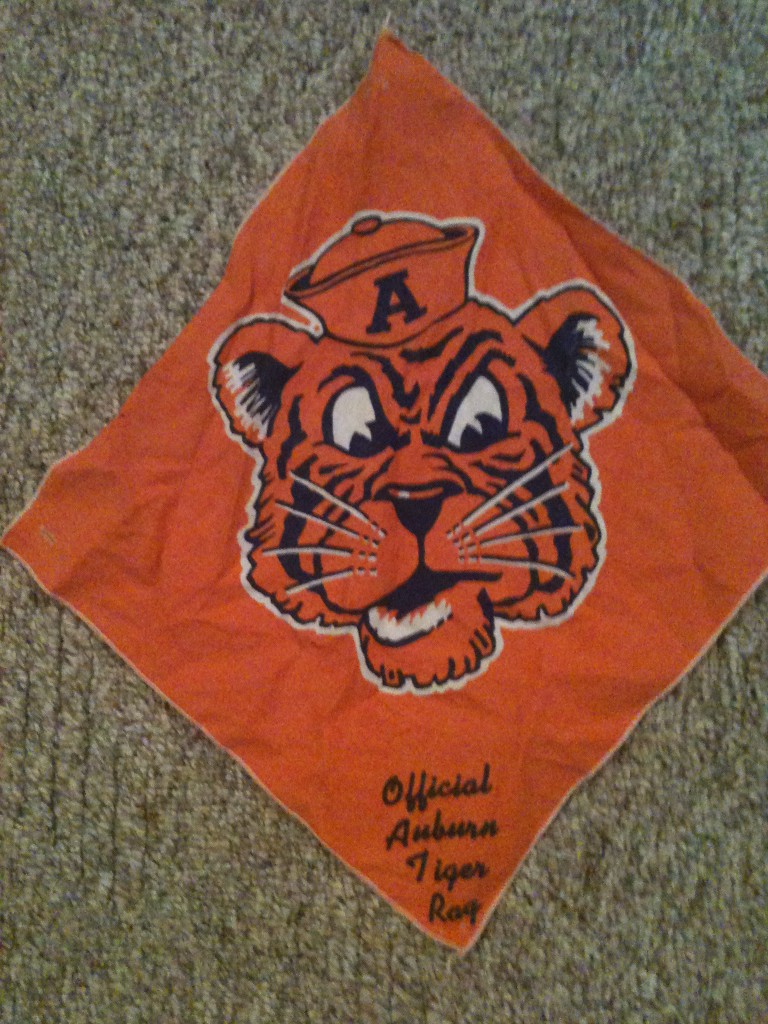 “Still unpacking and found my official Auburn Tiger Rag that came out in 1980.”

Before the Trooper Towel there was the Official Auburn Tiger Rag. One wonders if these were used to wave goodbye to Barfield after the season. 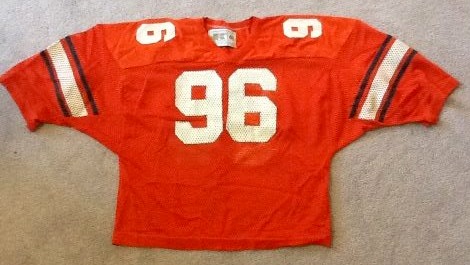 “Here is a pic of the orange jersey I have in my collection. WDE!” – @RHTIII

New goal for War Eagle Relics: Account for every orange jersey ever worn in a game on The Plains. It’s a lofty goal, sure, but at least No. 90 and No. 96 are on the board.

That’s it for today. We thank everyone again for their submissions and remind you to keep ‘em coming ([email protected] or @FearlessandTrue). Remember, your stuff doesn’t have to be old to be awesome. In fact, the next post will feature an item (or two) from the Tuberville era that I think is pretty great. Until then, War Eagle.