Last week we kicked off War Eagle Relics with a look at some of my own Auburn mementos (Dameyune for Heisman!) and asked for submissions to keep the project going. Y’all didn’t disappoint. I’ve received some really cool stuff from our readers, all of it appreciated. Here it is. 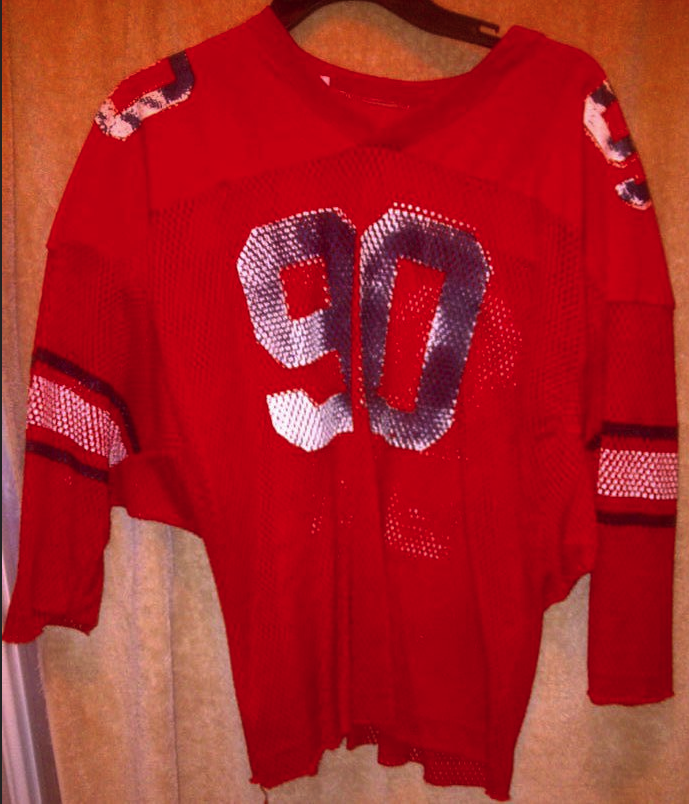 “Here is one of the original orange jerseys everyone loves to hate so much. Whether we like them or not and whether we want to see them again or not, they are a very unique part of our history. Who knows what has become of the other ones.

This one belongs to my friend Clay Yancey. His aunt was studying education at Auburn in the late ‘70s when some of her friends “procured” this item and then gave it to her. Clay actually wore it to a Randy Campbell autograph signing in the early 80s when he was about 12 or 13. When Randy spotted it he said, “Hey! Where’d you get that?” I don’t know what his reply was but Randy went on to say, “A good friend of mine named Vernon Blackare (’79-‘82) used to wear that thing,” and then happily signed the autograph.

Anyway, we’ve traded it back and forth since we were kids and I just happen to have it at the moment. It was in my possession the whole time I was at Auburn (’90-’95) and I actually wore it in several intramural football games. It got roughed up a little but that just added to the character.”

These are exactly the kind of things I hoped to uncover when we started War Eagle Relics. The orange jersey itself is an excellent find. The story behind it makes it so much more. 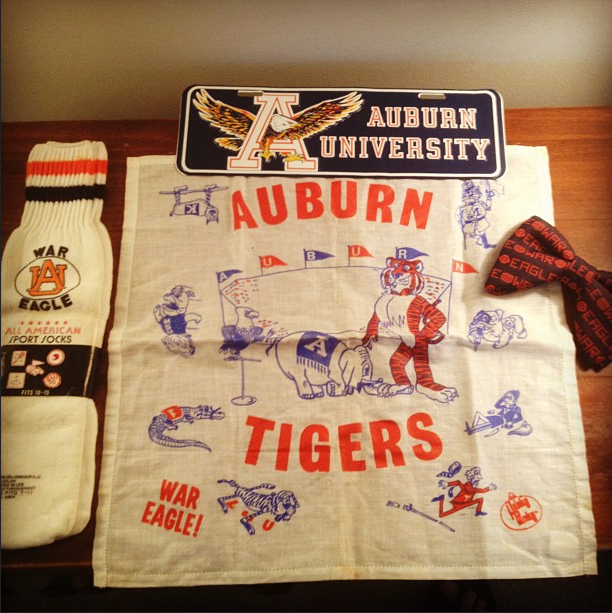 While the handkerchief alone is worth posting, those Auburn tube socks are nothing to sneeze at either. The bow tie, the classic “Eagle A” logo license plate—a great collage of collectables. 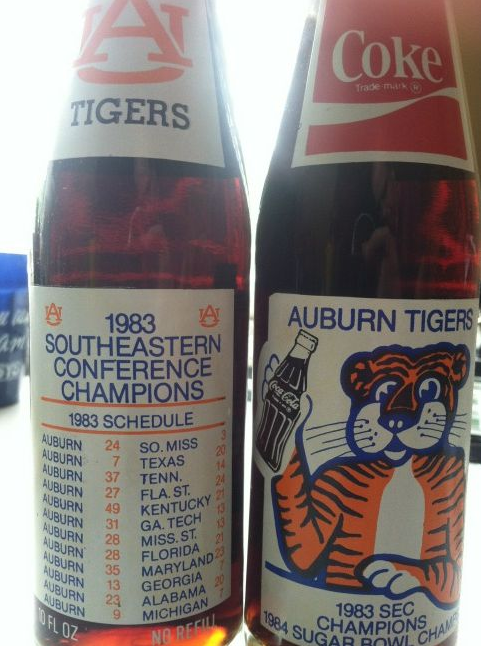 “When I saw the picture of the bottle night light it reminded me that I had seen that bottle before.  I found it behind some other AU items on a bookshelf in my office.  It still has “original” Coke in it. I was a junior at UNA that year and remember my Dad bringing several of these home.”

I’m amazed at the number of people who have managed to hold onto a full Coke bottle for nearly three decades, but I applaud you all. I was particularly excited to see the front of the bottle as my nightlight version was cut in half. I also realized after posting last week’s edition that I incorrectly dated the bottle as 1983 based on the season it celebrated and failed to realize the bowl game against Michigan wasn’t played until New Year’s Day, putting the bottle’s production date as sometime in 1984. 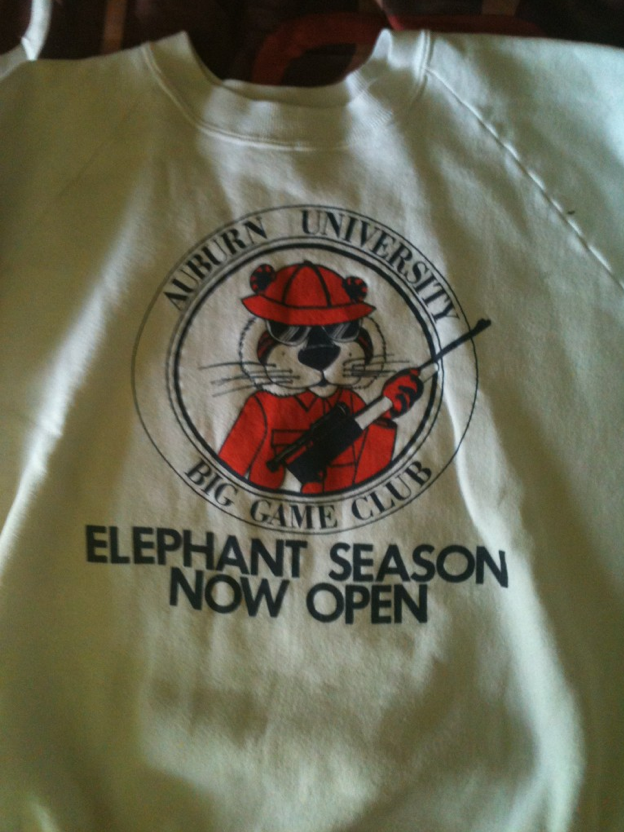 “A friend designed this sweatshirt for the first Bama game that came to Auburn 23 years ago!”

The sort of self-produced, unofficial apparel jives with War Eagle Relics’ raison d’etre just as much as orange jerseys. 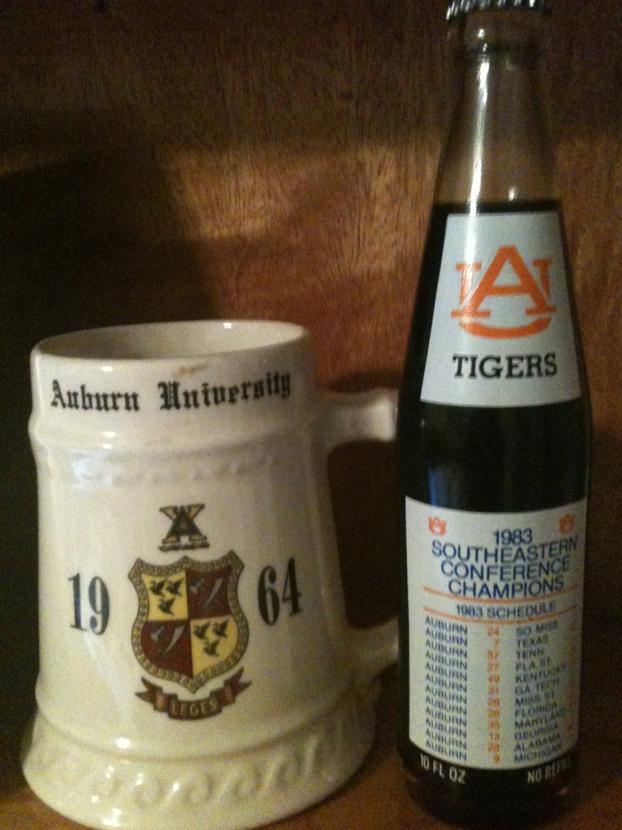 Another submission from one of Auburn’s top hoarders gives you another shot of the famed Coke bottle alongside an Auburn Delta Chi stein from 1964. Rusty, if you’re out there, Viki has been holding onto this for you for a long time. (But if this is also yours, you should be ashamed.)

And there we have it. Keep it coming. Email pictures to [email protected] (or tweet them to me @FearlessandTrue). If your submission didn’t make it in this edition, it will probably be in the next.