Born in the glorious wake of his touchdown dive against South Carolina last year (Victory the First), Cam Newton’s signature celebration—a mimed transformation from Clark Kent to Superman—isn’t just being ripped off by lesser gods of college football this year, it’s being appropriated by NBA All-Stars.

Last night, after the game-winning bucket against the Charlotte Bobcats last night, the Miami Heat’s LeBron James and Dwayne Wade turned to where Newton was sitting–he was paying another special court side visit to one of his biggest fans, Michael Jordan– and ripped their imaginary shirts open in obvious tribute.

Newton recently revealed that seeing uncredited imitations does indeed raise his gentle dander, but last night’s display was deserving flattery of the highest degree. And when we’ve crossed sports, obviously what we’re seeing here is the birth of a new fad a la planking and Tebowing: SuperCamming. Start sending in your photos today: [email protected] or copy us on Twitter: @wareaglereader. 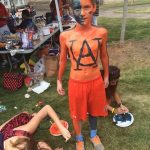