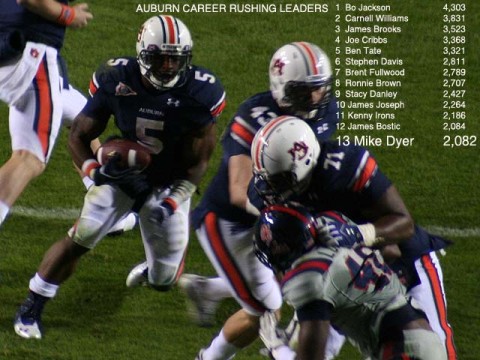 Michael Dyer has got to be looking forward to his next trip to Oxford.

Last year against Ole Miss, Dyer ran for a career-high 180 yards, the most ever by an Auburn freshman against SEC competition. Saturday night, he got 177 yards against the Rebels. It was the sophomore’s second-best game as a Tiger. Four yards. Five yards. Forty-eight yards. Repeat. Ladies and gentleman, Michael Dyer.

According to TWER statistician Dr. Kenny Smith, the Auburn freshman rushing record holder’s new career average of 94 yards per game has him on pace to finish the 2011 regular season in 10th place on Auburn’s all-time rushing list, Stacy Danley above him, James Joseph below.