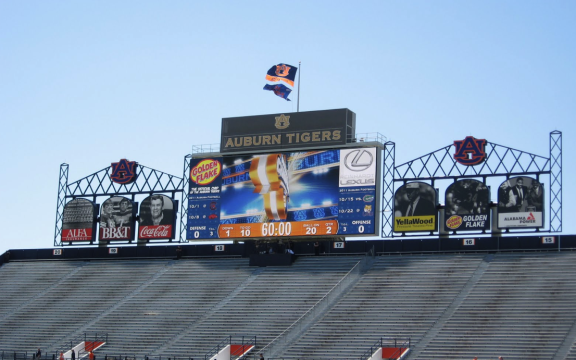 Title: An Open Letter to AUHD

Earmark 8:24 seconds somewhere in the pre-game. Sometime after the students and the recruits get settled and before the marching band’s intro video. Right around the cool archival video of Bo and Punt, Bama, Punt and the day Jason Campbell and Courtney Taylor slayed the Bengals. Right in this area, just play the entire video of last year. It is mid-August as we seize upon this idea and the video is as fresh today as it was on that night of possibility that we watched the in-progress version after the Georgia game. It is the heat of a late summer and the video still chills, as it did that bright January morning in Jordan-Hare when we saw the full strength of your labors.

And we’re going to need to see that video a few dozen more times.

Despite everything else that swirled around the season, the narrative of those guys in blue is one of our best tales. It would have been compelling if it were just another team, but the entire story was so gratifying to think of Kodi Burns becoming the archetype of an Auburn man in a jersey, Cameron Newton discovering his redemption and an unsung defense living up to their potential. An undefeated season is always a great story, but the chilling story behind Zac Etheridge’s comeback, Wes Byrum being his implacable self and Mike Dyer taking Bo’s torch to threaten the entire conference lives on.

We could discuss each player and how their contributions and subplots filled such a tremendous narrative. But to put it simply, this team is a joy to watch.