The Auburn Brew Club recently enjoyed the sweet taste of victory, 26 bottles worth.

The local group of homemade beer enthusiasts convened Saturday afternoon to sample and critique the labors of the Cascade Brewers Society, their Eugene, Oregon counterparts, who approached the Auburn club with a friendly wager before the Tigers met the Ducks in the BCS National Championship Game: losing fans owe winning fans a case of homemade beer.

“We thought, sure, we could scrounge a case together if we lost,” said ABC member Doug Bendinger, 47, who made the trip to Glendale for the championship, and who coordinated arrangements with the Oregon club. “But we didn’t expect to lose.”

They didn’t, and it didn’t take long for the Cascaders to pony up. Bendinger received congratulations via email on January 11 and the shipment from Oregon arrived in February, full of exotic pilsners and porters bursting with hops and humiliation. But if anyone asks, it was “yeast samples;” shipping off-the-grid spirits to one of the two states where home brewing is still illegal — Mississippi is the other — is somewhat frowned upon by various authorities. (The club also seems to receive a lot of packages of “spaghetti sauce.”)

A grassroots movement to legalize the hobby has been brewing for several years. But if you held the attitude of ABC members up to the kitchen light for inspection along with the IPAs and Schwarz, you might detect an almost bootleg is best pride in their current legal status (malt can go bad and alpha acids can oxidize, but that technically criminal thrill always goes down smooth). Whether the results are considered contraband or not, they’re committed to their craft for the long haul.

“You can turn it into science or keep it fun,” said Mark Nugent, an Auburn senior in civil engineering, about a quarter of the way through the case.

The beer nerds in Auburn might kind of be inclined to the former.

Which is why on Saturday, despite the two invited TWER staffers’ best efforts to tap the keg of schadenfreude with every sip (“This is three points away from being a great lager” — me…  “That beer lacked a ground game” — Dr. Jolley… “There’s a tear in my beer” — me) taking careful, deliberate pleasure in the beer itself took precedence over bragging rights.

“Mmmm…,” said Curt Bird, Professor of Molecular and Cancer Genetics in Auburn’s Department of Pathobiology, after sampling something called a Norweigian Christmas Ale. “Light, and kind of fruity.”

He looked at me and rolled his eyes.

“I’m talking about the beer.” 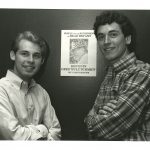