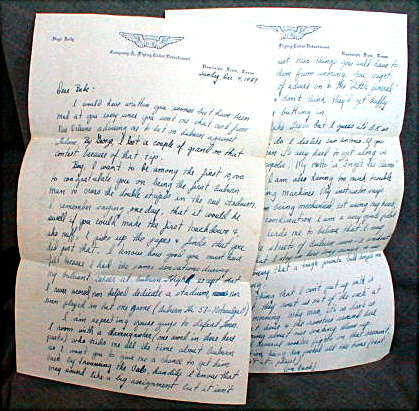 Babe McGehee, whose Sigma Nu fraternity brothers described that year as a man who played football “when he can escape from feminine admirers,” and who later married the daughter of Cliff “as in The” Hare, for whom then Auburn Stadium was later renamed, out-jumped two Gator defenders to catch a “looping” pass from Dick McGowen for Auburn’s first and only touchdown. McGowen’s extra point tied the game. It stayed tied (but shouldn’t have).*

It was the first (varsity) Auburn score in what would become Jordan-Hare Stadium.

Three days later, Hoyt Jolly, an old Auburn chum of McGehee’s, picked up a newspaper, spotted his friend’s name in the Sports section, and wrote him a letter congratulating him on the achievement. Sixty–nine years I acquired it through the magic of eBay.

It’s rather awesome, political incorrectness aside.

I would have written you sooner but I have been mad at you ever since you sent me that card from New Orleans advising me to bet on Auburn against Tulane. By George, I lost a couple of grand on that contest because of that tip.

Boy, I want to be among the first 10,000 to congratulate you on being the first Auburn Man to cross the double stripes in the new stadium. I remember saying, one day, that it would be swell if you could make the first touchdown and sho nuff, I pick up the paper and find that you did just that. I know how good you must have felt because I had the same sensation during my brilliant career at Auburn High, except that I never scored, nor helped dedicate a stadium, nor even played in but one game (Auburn Hi 57 – Notasulga 0).

I am expecting youse guys to defeat Tenn. I room with a damnyankee (one word in these here parts) who kids me all the time about Auburn so I want you to give me a chance to get him back by trouncing the Vols, handily. I know that may sound like a big assignment but it isn’t so hard. There are just two things you will have to do— 1) score & 2) keep them from scoring. You might pass this little piece of advise on to the “Little General” and the players if you don’t think they’d get huffy about an Alumnus butting in.

I don’t like Texas but I guess it’s O.K. as A HOLE. Especially do I dislike San Antonio. If you don’t speak Mexican it’s very hard to get along in that greasy metropolis. My motto is “Forget the Alamo”—if you can. I am also having too much trouble with these flying machines. My instructor says that aside from being mechanical, not using my head, and having no coordination I am a very good pilot. All of which leads me to believe that I may be back on the streets of Auburn soon—a wash out! Only hope that I stay in here long enough to use up this stationary that a tough private bulldogged me into purchasing.

Another thing I can’t put up with is the fact that they rout us out of “the sack” at 5:45 in the morning. Why man, it’s as dark as pitch at that hour and the roosters around here are complaining about our waking them up. I have had several rooster fights on that account; not to mention being henpecked all the time (that stinks, doesn’t it—phew!)

Taking every thing into consideration, if I had it all to do over again, I’d leave flying to the birds and [illegible] and I’d settle down to a life of ease somewhere far removed from civilization with all it’s new fangled contraptions.

Well Babe, being as this is the longest thing I’ve written since my freshman English theme, I’m about wore out. Give your mother, Mary, and Jimmy my love and all the boys my best regards and answer this letter pronto, podner (I’m getting to be a regular little westerner).

Your Pal and Admirer,

Players from the 1939 Auburn team reenacted McGehee’s touchdown 50 years later during halftime of the 1989 Florida game.

* “Homecoming and Stadium Dedication Day was rather spoiled by a typical Florida trick of upsetting the dope bucket,” reads the 1940 Glomerata. “The Gators tied this one, 7-7 and advertised their oranges at the half.”

* The Auburn Eyefuls of 1952
* I Survived the Kopper Kettle Explosion and all I got was this t-shirt
* Erin Andrews at Toomer’s Corner
* The Ron Swanson Pyramid of Auburn
* Against Me! bassist pulls for the Tigers
* Player on 1972 ‘Amazin’s’ squad battling Lou Gehrig’s Disease