I think it’s safe to say that few players have sparked the the Halloween creativity of Auburn fans like Cam Newton.

First this and now: 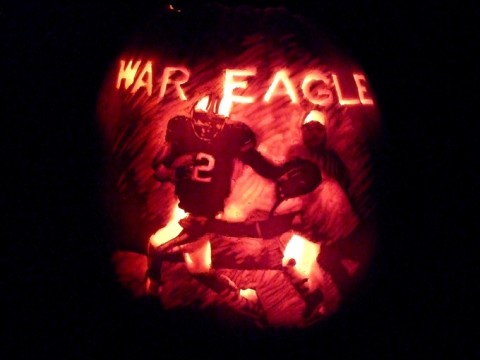 Of course, carver Andrew Henley will probably be hunted down like a dog by university officials (officially licensed Cam-O-Lanterns are available only in area bookstores), and rightfully so: after all, are the “oohs and ahhs” of Auburn trick-or-treaters really worth risking the eligibility of the Heisman front-runner?

Actually, this thing is so kick-a — including the ref is genius — I’m inclined to say yes: “… he walked among us and blew kisses for eight games and at least two incredible pumpkins…”

Submitted by Andrew Henley (of the Terry Henleys?).

… and check out the Photo of the Day archives here.