Leisure with Dignity by Dean Jolley 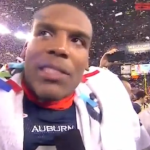 It’s been 9 months since Dr. Jolley’s last column. This time, we let him cuss.

One of the interesting features of this year’s Iron Bowl is the apparently radically different views of the game: for Auburn fans, a sublime comeback, or Bama fans, a dreadful collapse. But which was it—comeback or collapse?
Dr. Jolley says it was both. 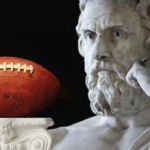 William James, speaking somewhat before an Iron Bowl: “You reach the Mephistophelian point of view as well as the point of view of justice by treating cases as if they belonged rigorously to abstract classes.  Pure rationalism, complete immunity from prejudice, consists in refusing to see that the case before one is absolutely unique.  It […]

Dr. Jolley turns to French Christian existentialism in investigating the possibility of fans’ surety and charity in the Cam Newton saga:
“Let’s just face it. No fan is sure. No reporter or blogger is sure. Surety simply is not to be had. And neither, unsurprisingly, is charity toward other fans. Everyone is exasperated. No fan is willing to give rival fans a hearing.”

It may be that, as ordinary moral beings, we live our lives forward but understand them backwards. But a football team lives forward only as far as the next Saturday; and, it understands nothing except its own mistakes backwards.
Play one game at a time. An old book, a noble one, says somewhere: “Today is the day of salvation.” For this Auburn team, that Today is Saturday, and the scene of salvation is Oxford. Today and today and today. One game at a time.