It’s about time Jay Jacobs bought Dee Ford a glass of rosé. He is, after all, the man responsible for getting her into this whole thing—going on five years of waking up at 4 a.m. to ride the Auburn football roller coaster as eagerly as anyone across the pond…

“Whatever Dee wants, Dee gets,” he says, and they all laugh.

I have them on Skype. They’re at a pub called The Betjeman Arms–Dee, Jay, and his 23-year-old daughter Meagan, who kind of on a whim invited her dad to join her on a leg of her European vacation, her first big summer trip since graduating high school.

The plans came together on Wednesday.

“We’ve never spoken except through direct message on Twitter,” Jay says. “So we were coming over here and my daughter Meagan, who like all of us, has been following Dee, said ‘I wonder where Dee is in relation to London?'”

Answer: About 40 minutes away by train in the Kent town of Gillingham, where Dee drives her Mini around estimating the value of houses and office space for banks by day, and checking Twitter for the latest news–we’re talking Casey Mize, Bruce Pearl, softball, everything–from the Alabama town of Auburn by nights. And on the weekend. And really any time she can because she’s admittedly kind of obsessed. I mean, it’s Friday night on the outskirts of London and she’s hoofing it to the train station for a War Eagle Moment with Auburn’s now former Athletics Director wearing the Auburn shirt he sent her. They hugged. They hugged some more. They drank. She gave them some English football–“proper football”–jerseys. It was great.

“Oh my God, he’s lovely!” she says. “I thought he’d be really stuffy, but he’s just really normal. We talked about everything. Where he’s going, how they liked England, how weird it was to compare Auburn and here, and about how it all started and everything.”

He left off the second underscore. That’s all it took.

@dee_ford’s phone rang off the hook with notifications congratulating her on all her success and with hashtags about wars and eagles.

Was she being hacked? Cyberbullied? Who the hell is Jay Jacobs?

“Please stop retweeting @jayjacobsauad’s tweet about Dee Ford. He used my address not the right one. Too many messages none 4 me. #notafootballer”

By Sunday morning, Dee’s plight had become a thing. Then it happened. She stopped fighting it. She embraced it.

An Auburn star was born.

“It was late at night and no one was listening to my protests that I wasn’t Dee. Someone said something that appealed to my sarcastic sense of humor and I replied,” she says. “It became fun to make fun of their mistakes and a darn sight easier to respond that way!”

That night she had 20 followers. She’s now at 3,053, almost all of them Auburn folks, who adore her to the point of periodically offering to crowdfund her airfare and tickets to an Iron Bowl or something.

“I have a new apprentice working for me and I was trying to explain my Twitter feed to her,” Dee says. “She laughed, a lot, especially when I tried to explain that in a town like ‘Little House on the Prairie'”–that’s how she chooses to imagine Auburn–“I’m almost a household name.”

After nearly five years, her Twitter bio still reads: “NOTE! I am not the Auburn/Kansas City Chiefs footballer, who is @dee_ford_ I’m a boring surveyor from Kent but now also a firm member of the #AUfamily #WarEagle” 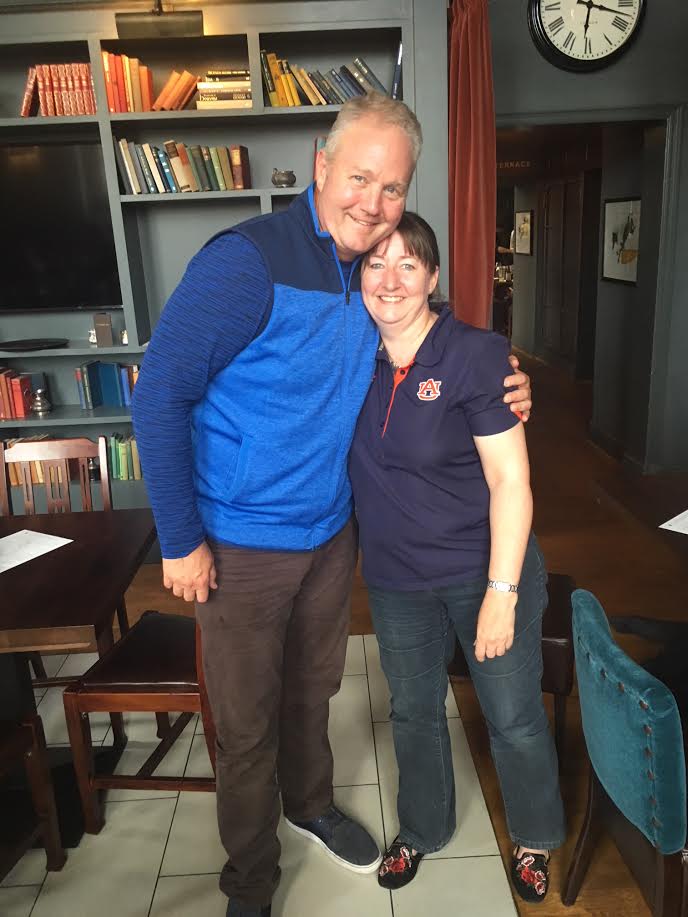 An hour and a half and two pints later, Jay and Meagan left to catch “Harry Potter and the Cursed Child” at the Palace Theatre. Dee grabbed a cheese and Marmite sandwich from Starbucks and hopped the train back to Gillingham.

It wasn’t the first real-life encounter born of the missing underscore. She and 1992 Auburn grad Jen Roemershauser, who occasionally flies into Heathrow en route to Aberdeen for her oil and gas industry gig, have connected three times.

“She actually saved my bacon on one of my trips,” Jen says. “I was headed to the airport in Aberdeen to catch my flight to London when she texted me that the computer system at Heathrow had crashed and all flights were canceled.

“I had a new flight booked for the next day before most folks even knew there was an issue!”

Dee met another Auburn fan in 2015 when she went to see her alter Dee-go at the Chiefs-Lions game at Wembley Stadium. She also, you know, hung out with Dee’s family and even managed to grab a few minutes with him on the phone.

“I have a Plenty of Fish profile and my interests list college football,” she says. “It’s sometimes used by English men trying to impress me with football knowledge. English men don’t know a thing about football and my profile is still there waiting for an Auburn man to move to Gillingham.”

Too bad Jay is married.

“You know, it was like I had known Jay forever,” she says. “Such a nice bloke.”