There were more than 100 messages of congratulations waiting for Dee Ford on Twitter Sunday morning. Again.

It started a couple of months into the football season.

“My phone is on 24/7 because I’m an out of hours contact for the local police, whom I help find stolen dogs,” Ford says. “My phone kept bleeping with messages in the middle of the night.”

Ford would wake up to nonsensical tweets about hair color and esoteric hashtags like #WarEagle and #WDE. Finally, after some Googling, she learned why. Dee Ford, the dog-loving, commercial property surveyor from Gillingham, Kent, was being confused with Dee Ford, the piano-playing, standout defensive end from Auburn, Alabama. And what with not only their identical names, but their nearly identical Twitter handles (hers: @dee_ford, his: @dee_ford_), Ford knew it could continue.

After Football Dee Ford’s MVP-winning performance in Saturday’s Senior Bowl in Mobile, it was pretty much nonstop. 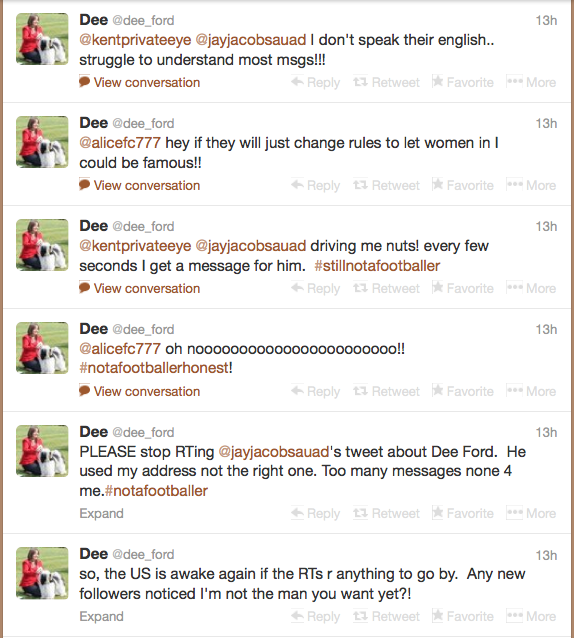 “It went really mad this weekend,” Ford says, “but it had gone a bit crazy a couple of weeks back when Dee himself tweeted his (Twitter) address wrong”—he later tweeted a correction and apology—”so I was already getting odd followers for him and everyone telling me what a great singer I was and how I play great piano. The stupid thing is, when I told them I wasn’t a singer they didn’t believe me… I sing as good as I play American Football.”

She is mentioned in so many American football-related tweets, and has gained so many Auburn fan followers—more than 100 on Sunday alone—Ford actually edited her Twitter bio to read: “NOTE! I am not the Auburn footballer, who is dee_ford_ I’m a boring surveyor from Kent.”

Ford says she actually considered changing her Twitter handle, but decided not to because “hey, I was here first and it’s my name. Forty-years is a long time to suddenly be someone else.”

Her friends, who “think it’s hilarious,” have proposed their own solution to her social media situation.

“They suggested I propose to Dee. Then we mesh our names like Brangelina and become Dee Dee Ford Ford,” she says. “If only I were younger…”

While Ford was competing in a dog show Sunday (“I didn’t win”), a new wave of mentions from across the pond flooded her phone. Only instead of being tweets meant for Auburn Dee, Auburn fans were now retweeting British Dee’s comical attempts to set the record straight.

This go-round, she embraced the case of mistaken identity, even hashtagging her requisite “I AM NOT THE FOOTBALLER” tweets with #WarEagle. She spent Sunday afternoon and evening enjoying a traditional English tea of Boiled Eggs and Soldiers and engaging with Auburn fans, who gave her a crash course in Auburn tradition and American football.

One even asked for her address so he could send her some Auburn stuff (UPDATE: which he did).

“Sorry for the mistaken identity,” tweeted Auburn Athletic Directory Jay Jacobs, who yesterday accidentally left off that all-important final underscore in a tweet congratulating Dee Ford on being named the Senior Bowl’s Most Valuable Player. “Glad to have a new member of the Auburn Family across the pond, though. Message me with your address and I’ll ship you some Auburn gear. Welcome to the family!”

“How could I not be an Auburn fan now?” Ford says. “The supporters on Twitter are amazing. They love their team and they didn’t mind a Brit with a silly sense of humour screaming at them to stop tweeting nonsense she doesn’t understand!”