Jimmy Brandt is keeping the gloves. And the sleeves. But starting Oct. 6, the helmet that Chris Davis wore during the 2013 Iron Bowl, that protected his holy head during arguably the greatest play in college football history, is up for grabs.

Brandt, a 2003 Auburn grad who lives in Birmingham, says he acquired several pieces of Davis’ Auburn uniform “directly from Chris” after the 2013 football season. And the best one of all he’s putting up for auction.

“We’re starting with a modest opening bid of $5,000,” Ken Goldin, whose company is handling the auction, told ESPN’s Darren Rovell. “We’re expecting anywhere from between $25,000 to even approaching six figures.”

“I have Carlos Rogers’ game-used jersey from the 2004 Iron Bowl and an end zone pylon from when we rushed the field after beating Florida in 2001 when I was a student,” he says.

Neither come close to The Helmet. 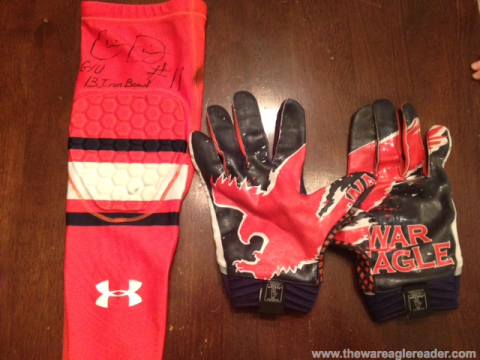 “That helmet really is a piece of history,” Brandt says. “One play, one second, an instant legend. I hate letting it go… but I still have the gloves.”