When it comes to individual excess apparel donations, Mangers On A Mission typically asks for at least 20 items. For Gus Malzahn, the young, faith-based charity was willing to make an exception.

True, Malzahn probably could have spared several of his now iconic sweater vests. But the only one MOAM really had its eye on was the one that saw action in the greatest football game ever played.

“There’s always the thought ‘how we can get Coach Malzahn involved’ since he’s so perfectly aligned with our mission,” says MOAM founder Drew Boe. “But obviously, after the Iron Bowl and what happened to the football…”

Thanks to then Auburn ball boy Andrew Kozub, it didn’t fall into the wrong hands.

“After the dog pile and everything, the ball was just sitting off to the side,” Boe says. “He really made a heads up play as a manager, of going over and picking that ball up. He returned it to (Auburn Equipment Manager) Dana Marquez and then Dana took it up to Jay Jacobs and gave it to him.”

A few days later, the instantly legendary piece of football memorabilia was appraised at $100,000.

That’s a lot of plane tickets and building supplies—a lot of pretty much everything you need when you’re developing orphanages in Africa.

Started by Boe in 2013, Managers On A Mission’s primary goal is to facilitate volunteer service opportunities abroad for student equipment managers, who Boe says frequently take on major leadership roles in athletics at both the college and professional levels. (A perfect example, according to Boe, is Auburn Senior Associate Athletic Director Scott Carr, who started out as a student manager at Florida; Carr explains how his student manager experience prepared him for his career in an interview is featured on the MOAM’s website.)

“Our biggest program by far is our international mission trips to orphanages in Africa,” Boe says. “We take select student managers over there for about three weeks, leading sports activities and just really connecting student managers with such great sports experience with these orphanages. We’re basically providing resources and talent, and kind of a big part of that is having individuals to connect their resources and contacts with those in such dire needs.”

“We’ve positioned ourselves as the go-to place for coaches and professional staff, and at a professional level, players, to maximize the use and value of their used sports apparel,” Boe says. “We take donations of their used or excess footwear, workout clothes, you name it.”

Some of the clothes and equipment the Minnesota-based ministry receives go straight to those Boe and Co. are trying to help. Scroll through the organization’s photo galleries and you’ll see kids in countries like Malawi decked out in Iron Bowl shirts, Oregon Kicking Camp shirts, Notre Dame basketball shirts, and, thanks to one of Boe’s first connection coups, Tubby Smith Basketball Camp shirts. When coaches switch jobs, they switch wardrobes, and when it comes to figuring out what to do with the dozens of T-shirts, hats, and jackets bearing the names and logos of their former employers, MOAM wants to be first, most obvious option. 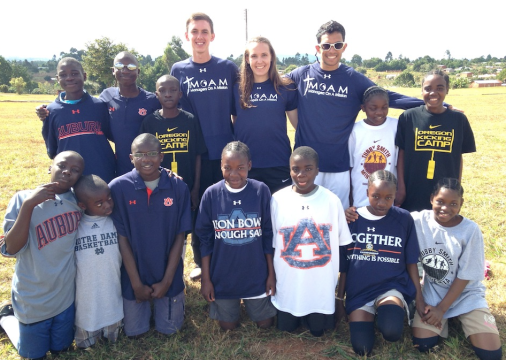 “When Tubby Smith went to Texas Tech, he left us will all the clothes he was issued at Minnesota,” Boe says. “Polos, button-ups…”

Boe was a student manager for the Gophers while earning a degree in Sports Management. Thanks to connections made while working as a graduate equipment manager at Virginia Tech, he also received a large donation from Hokies head football coach Frank Beamer.

“MOAM provides a unique program developed to positively progress the lives of (student equipment managers) both on and off-the field,” Beamer writes in a testimonial posted on MOAM’s website. “MOAM programs provide funding for service projects nationwide and mission trips to Africa, not only help cultivate the future leaders of sport, but they also provide resources to those in need.”

However, the majority of apparel donations are put for for auction on eBay to support the organization’s work overseas. Thanks to eBay’s “Giving Works” program, non-profits like MOAM are able to keep 100 percent of the final bid on an item. Currently up for bid on MOAM’s auction page? Team-issued Nike basketball shoes, T-shirts, baseball hats, football gloves, windbreakers, footballs, baseball gloves…

“You can lose perspective on how valuable some of those items can be,” Boe says.

There’s no risk of that with the sweater vest MOAM plans to list in a couple of weeks. 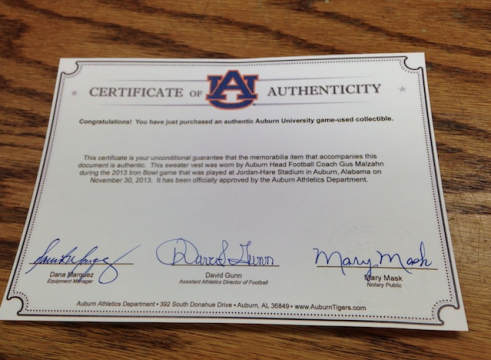 “We realized that there was some pretty serious value assigned to what just happened in the Iron Bowl,” Boe says. “That really started the wheels turning. It wasn’t until a few weeks after that I approached (AU Assistant Athletic Director) Coach (David) Gunn in terms of something Coach Malzahn would be open to (donating). He’d already taken the sweater vest home and had it in his closet for a while before I ended up receiving it from him.”

MOAM received the vest in April and sent it off to be framed along with a certificates of authentication as well as an autographed photo of Malzahn taken during the Iron Bowl.

“We wanted to set things up the right way in terms of making sure that Coach Malzahn understood what our mission was, what we’re trying to accomplish,” Boe says.

If the vest ends up going for anywhere close to the initial valuations—sports memorabilia dealers have given appraisals in the $50,000 range—they’ll be able to accomplish a lot.