Mattie Griffith is resting easy Saturday night, and not just because of the Percocet she’s still on for the pain.

The 18-year-old from Atlanta, whose anesthesia-induced concern over Auburn’s chances against San Jose State helped make the hilariously adorable video (watch it now) her mother Amy shot Wednesday just after Mattie’s wisdom teeth were removed go viral, watched the Tigers handle the Spartans to the tune of 59-13. That’s an impressive performance, no matter what Dayton says.

“I talked to him last night,” Griffith says of her friend Dayton, a Tennessee fan (“I was like, Tennessee’s worse than Arkansas!”) who told her that Auburn’s win over the Razorbacks didn’t mean anything, and whose name she spits out in the video in rewind-worthy disgust. “He was like ‘thanks for calling me out, you jerk.'”

The reactions from everyone else the Hillgrove High senior ran into at Hillgrove’s football game Friday night were a little more positive.

Is she mad that her mom posted the video?

“No, I don’t really care,” she laughs. “I do embarrassing stuff all the time.”

Actually, Griffith says she had hoped her mom would capture her post-surgery stupor on camera to see if she really would be as hyper-emotional as the oral surgeon predicted. That those emotions manifested as the most spontaneously sincere display of affection for the Auburn Tigers since Bill Wingo ran onto the field during the 1969 Iron Bowl can be explained by the last words she remembers Dr. Henry Blair, an Auburn grad, saying to her before she went under the knife.

“He said he’d give me the special Auburn treatment,” she says.

But it wasn’t just the gas talking; the roots of Griffith’s Auburn devotion run deep.

Her grandfather, Doc Griffith, played fullback for Auburn from 1961-1964, blocking for superstars Jimmy Sidle and Tucker Frederickson. His two touchdowns in Auburn’s 1964 win over Southern Miss were the first of his career, and the only Auburn points scored in the game. The Plainsman, Auburn’s student newspaper, was quick with kudos it felt were long overdue.

“Doc Griffith’s pair of touchdowns deserve comment for the likeable fullback from Hokes Bluff has labored long in the shadows, his outstanding play dwarfed because someone else always did the scoring,” Plainsman sportswriter Gerald Rutberg wrote. “Saturday it was Doc’s turn to cross the double-stripe for the first time in his college career. There was no doubt where the senior was bent on going on each of his pair of pay dirt trips. He had TOUCHDOWN written all over his back.”

Doc signed with the Kansas City Chiefs after his senior year, and currently lives in Hokes Bluff. 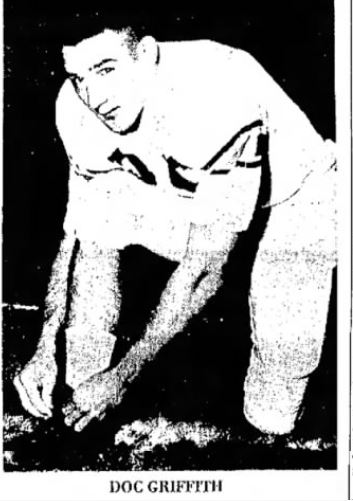 Griffith says she’s not sure if he’s seen her video yet, “but he probably has. He’s a huge fan still.”

So is her mom, her dad, her two brothers, her two sisters. They’re just not able to make it games that often. There are prior commitments, and of course football tickets for a family of seven aren’t exactly cheap.

Of course, that Dayton probably wouldn’t go to a game in Jordan-Hare now, even if he got in for free.

“He said he would be the most hated person in Auburn,” Griffith says. “I don’t really have a problem with that.”

Related: The identity of the “lion that was hugging that man” revealed!