We’ve known since his first snap at Jordan-Hare that the Blessed Individual marched to the beat of his own DJ out on the gridiron.

But apparently that’s no longer a metaphor, as you can see in Under Armour’s latest Cam commercial (“Cam’s Night Out”) which, according to Darren Rovell, is debuting tomorrow night during the NFL Combine.

What’s Cam doing with all that record-breaking endorsement cash? Hiring Araab Muzik, not Katy Perry, to soundtrack his off-season workouts.

UPDATE: ESPN The Magazine sent David Fleming to the commercial shoot. He wrote about it. “What are we looking at? The next great pitchman in sports, that’s what.”

Related: Katy Perry hung out with Cam Newton—and she liked it. 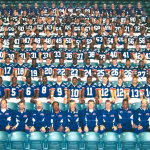