The latest installment in RPM (that’s Rah-rahs Per Minute), TWER’s series focusing on the vinyl sounds of Auburn Spirit too long relegated to the rotting Shasta box bulk-bins of our thrift stores and garage sales, delves into the mystery behind the 1979 Auburn Souvenir 45 rpm Record “Hello… Bear Who.” 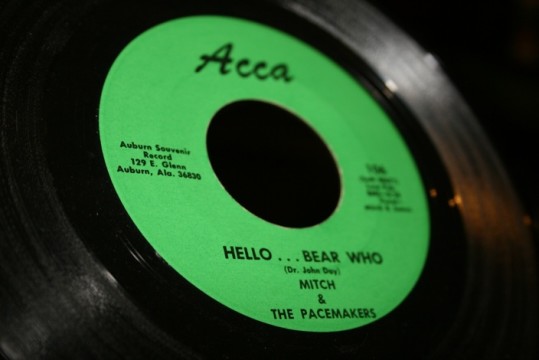 Mitch was easy to find – one Google search, one phone call, one ring, one hour. “Hello Mitch Emfinger, how do you do?”

But I can’t find Dr. John Day anywhere. Not in the Glomerata, not on Google, not in the 1988 edition of the alumni directory (in case he also went here), not in the 1963 Auburn-Opelika phone book.

Here’s what Mitch and I think we know about John. He worked at Auburn, a professor probably. Veterinary? Maybe – but James, the other ol’ timer Mitch kept hollerin’ at to get his mind straight on all this stuff while we were on the phone, couldn’t quite remember, either (is James a brother? Former band mate over for a visit? For some reason I didn’t want to ask — oh wait, there’s a James Emfinger in Eclectic, where Mitch was born, and the vocals are credited to “Mitch and James,” so I’m thinking James is both)… and, oh yeah, I also can’t find a “John Day” in The Speculum (you heard right – the Vet school yearbook), at least the ’77 edition, and of the three I have that’s the closest to the time when we know he was here.

The main thing we know about Dr. John Day, other than that he’s dead (Mitch is pretty sure it wasn’t long after all this stuff) is

that he was the one who came up with the idea, who came up with the lyrics — “he just thought it deserved a song about it,” Mitch said — and that to commission the thing he came to Mitch because he was friend’s with Mitch’s sister (she ran a boarding house near campus, maybe that’s how they knew each other ) and also because Mitch and The Pacemakers still carried a little regional clout in 1970. In the early 60s, they had a regular gig at the Jennings Rose Room in Atlanta, which could hold a weekly Saturday night twist contest for up to 3,200 people, and they brought “Godfather of Sax” Ace Cannon on stage a time or two, and shared some tour stages with Bo Diddley and Marty Robbins and folks like that. Hell, they would have been signed to King Records (off the strength of this 45 they put out on Bethlehem Records: A-side “One Chance” / B-side “I Could Cry”) had it not come out that their manager was the guy King had fired a few yeas back for bootlegging some of its other artists (not to mention the embezzlement). And they had only recently stopped playing with Russell Smith, Jerry Lee Lewis’ original drummer (he kept the beat on The Killer’s first ever television appearance) who thought the fall-out from the whole marry-your-13-year-old-cousin thing was mostly over by ’69 and went back to Jerry Lee for some gospel numbers on “The Mike Douglas Show,” etc. But Mitch and the Pacemakers, aka Mitch and the Echoes, aka Mitch and His Five Echoes got another drummer and kept at it up until the 80s, when the Emfinger clan finally convinced Mitch to buy the Tiger Laundromat and settle down in Tallassee.

Mitch is also fairly certain that Dr. John Day wasn’t in the studio with them down in Satsuma when they recorded it – which probably explains the unfortunate pronunciation of Jordan. Mitch (mostly because of the sister) was (and is) an Auburn fan when asked, but rarely went to games because he was basically on the road for 30 years. Filtered through the sass of a punctuated rock ‘n’ roll delivery, Mitch’s southern drawl is enough to soften the cringe (…Shug Jawdon.) But a fan passionate enough to want to commemorate an Auburn victory in song surely would have known better and could have corrected it. And that’s really the only thing we know for sure about Dr. John Day. He must have been that kind of fan. His is the name in the parentheses. He’s the one who wanted Bear Bryant to suck it in song like he did on the field. (Can’t see the video? Try here.)

There were others, t00*. Auburn’s 49-26 victory over Alabama in the 1969 Iron Bowl was the worst defeat in Bear Bryant’s career and the immediate tone of celebration was like Punt, Bama, Punt three years before Bama punted, the jubilation charged from the opposite end.

In ’72, it’s a come-from-behind upset by the narrowest margin possible, in the most implausible scenario imaginable.

In ’69, it’s a foot-on-the-throat blow out capped by a 100-yard whim of a fake punt by a dude with this awesome, memorable name — Connie Frederick, (oh! he’s electric) — who’s so drunk with joy, his game plan inhibitions so totally shot, he decides — after backing up and looking to make sure he’s actually on the goal line so he can tell himself that he ran the full 100 yards — “nah, I’m not going to punt, no one’s rushing me, I’ll just run for a touchdown.”

Shug smiles slyly across the field. Bear has his hands on his hips (and panties under his pants, apparently). Bama fans stream toward the exits. Auburn fan’s stream onto the field. There’s still 42 seconds left. Gary Sanders, Auburn’s play by play man, wonders if Auburn will go for two. Some of the fans start hugging the players on the sidelines. One guy walks to the 37 yard line and kneels down. (We interviewed him.) 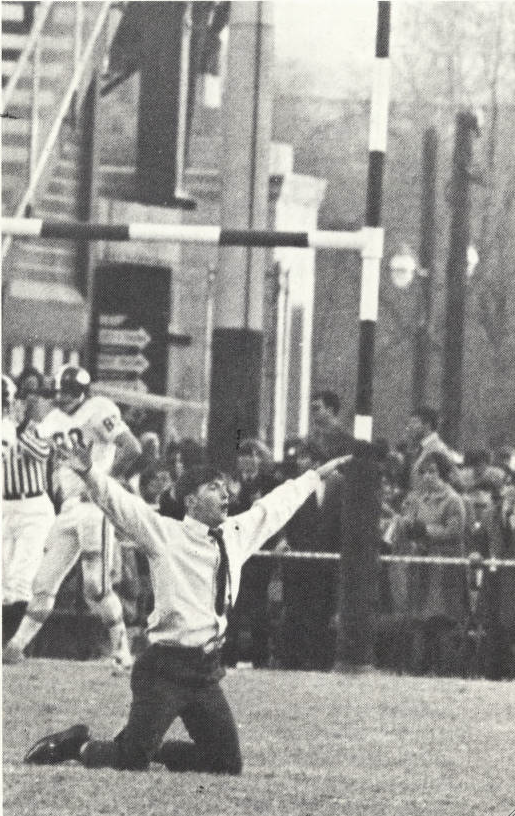 I know it’s next to impossible —in fact, I think someone once told me the name of the guy — but I like to think that maybe just maybe Dr. John Day is that dude on the field, on his knees, drunk on every single drop of that moment, but sober enough to think ‘you know, this deserves a song.’

Mitch said the thing sold like hotcakes.  Maybe it did. It’s pretty catchy; so is the B-Side, “Mitch’s Boogie.” The phone call was worth it.

Lyrics to Hello… Bear Who

Bear walked the field and he wrung his hands.
A score of 49? He couldn’t understand.
Alabama now is Auburn Tiger land.

Hello, Shug Jordan.
How do you do?
Ol’ Bear who will remember you.
We’ll win again over you know who.

Connie faked a punt, Pat passed that ball.
Beating Alabama ain’t nothing at all.
All Auburn’s men… (unintelligible).

* More on them later.

Photo of the kneeling Auburn fan from the 1970 Glomerata.

Video of the 1969 Iron Bowl uploaded to YouTube (for posterity’s sake, and for ease of viewing) from an MPEG downloaded from the folks at WeagleWeagle.com, THE place for jpegs of almost every Auburn football program illustrated by Phil Neel. Visit them. They’re doing God’s work.

Mitch and The 5 Echoes ad via.