Norman Schwarzkopf, the rock star general of Desert Storm who won a war in like 9 seconds or something, died yesterday at 78. And the world doesn’t feel quite as safe.

So as a former Rambo III for Genesis playing 6th grader who logged the flaccid launch of every errant SCUD shot down by the made-in-Alabama Patriot missile for, like, a 30 page journal turned in to Mrs. Forrester for mega social studies extra credit, who can only see Wolf Blitzer in night vision, who still has the Desert Storm coffee table photo book he got for Christmas 1991, it is an honor to remind everyone that Gen. Norman Schwarzkopf’s daughter went to Auburn. 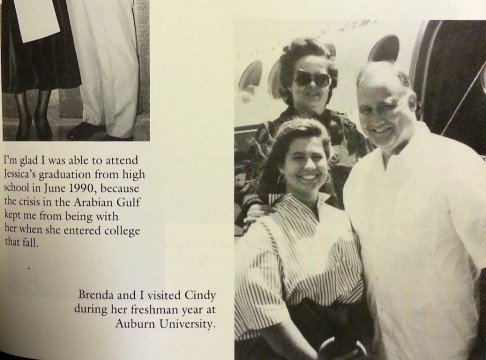 Yep, Cindy Schwarzkopf. Did she graduate? I’m not sure, but she was definitely a freshman in 1988. It’s in his book. And she’s in the Glom. Yes, it was before her dad became a household name, but still—if you were on the Plains in the late 80s, you were probably in the safest place in the world, whether you knew it (or could pronounce the reason why) or not.

But there are two pages listed after “Auburn University” in the index of Stormin’ Norman’s autobiography, not just the one with the thing about Cindy not being able to be at his four-star pinning ceremony because “she had just started her freshman year at Auburn.”

From page 330 of “It Doesn’t Take A Hero,” which talks Prince Sultan’s son Khalid, with whom Schwarzkopf would have to coordinate all aspects of the American forces’ presence in Saudi Arabia or something:

Khalid was ideal: he’d been educated at Sandhurst, the British military school, had attended the U.S. Air Force Air War College at Maxwell Air Force Base in Alabama, held a master’s degree in political science from Auburn University, and was the highest ranking prince in the Saudi armed forces.

h/t Rich “The Drive” Perkins, who served under Schwarzkopf in Desert Shield / Storm.