On Sunday night, we kicked off a Twitter hashtag craze—#ironbowlgamedaysigns—with “Toomer’s Karma.” It took off so hard and so fast al.com did a story on their favorites. Apparently the thing was even trending for a day or two.

Hashtags didn’t exist in 1969. Neither did ESPN or Bama’s defense: That year, Auburn scored more points (49) on a Bear Bryant-coached team than anyone ever had or would (t’was a song-worthy Iron Bowl).

But if ESPN and College GameDay and College GameDay signs and Twitter had existed, we’d like to think that the banner at the 1969 Iron Bowl featured in this front page photo collage printed in the Dec. 5, 1969 issue of the Auburn Plainsman would have made it on someone’s list, and maybe eventually past the ESPN censors. 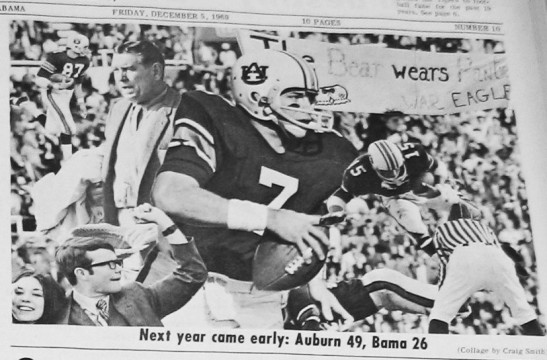 #thebearwearspanties… let’s get it trending.