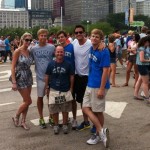 LSU women aren’t the only ones—television’s most famous former Florida coed not named Matlock star Nancy Stafford is also OMG’ing over one of our own. And no wonder. The dude, a fairly famous guy name Josh Hopkins, apparently majored in “Southern Girls” during his time on The Plains. No, he didn’t graduate, but his Auburn […]