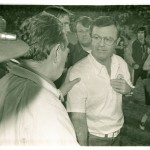 Here’s Shug Jordan doing the “Good Game” with Darrell Royal after the 1974 Gator Bowl. Royal died yesterday at the age of 88. It was the only gridiron meeting between the two coaching legends Seven-point underdogs going in, Auburn dominated and beat Texas, 27-3. Auburn’s 1974 squad is the awesome asterisk of the post-Amazin Auburn […]