Whenever I want to remember that 1985 existed, I look at this photo of the Sigma Nu’s contributions to that year’s Wreck Tech parade. (I think “Rambo Over Tech” may have been an actual play call.) 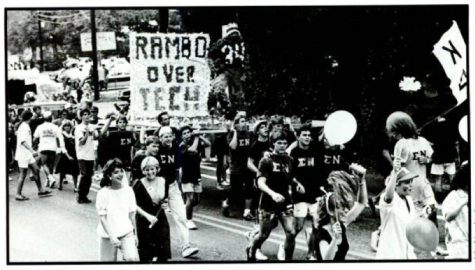 “Auburn 17, Georgia Tech 14–At Atlanta, Bo Jackson rushed for 242 yards, including a 76-yard touchdown run in the fourth period, to give No. 8 Auburn a come-from-behind victory.”

No man, no law, no yellow jacket could stop him. They obviously forgot who they were dealing with.