The cover of Zen and the Art of Motorcycle Maintenance always said pulp self-help crap. All the wrong words were right there: international best-seller, “provocative,” “deeply affecting,” “modern classic that has inspired millions,” Zen. Add that to its status as a Facebook favorite of several supposed disreputable readers and its prominence on various Internet life-changing books lists and it was hard for me, A Serious Reader, to take Zen seriously. I tend to take the elitist approach: If it’s for everyone, it’s not for me.

Wrong, of course, as most self-righteous assumptions tend to be. I was talking to a Lit professor in his office about Zen a couple months back, ostensibly about a paper but what was really me trying to leech some book knowledge, and he recommended a list of books, several of which I’d read, a list which included Zen and the Art of Motorcycle Maintenance. “I always thought that was pulp.” “Oh no. It’s very good.” Hmmmm.

So I bought a copy and it’s been sitting on my shelf for the last three months. The other day, between books, I picked it up and started reading. Two days later here I am, spreading the words.

An aside before we continue: Reading should be directed by excitement and whim. The best reading, in my mind, is not force-fed. It’s not slogging through three chapters of Twain to please a teacher. It’s not memorizing and dissecting symbolism for BS outdated structuralist professors who’ve forgotten what reading should be all about. Of course video games and TV and the Internet are more appealing. Forced reading is the worst reading. Read what excites you, what you can’t put down. But realize what bores you today might have your knickers in a wad two months from now. Sometimes you’re not ready for a book or its ideas. (So ends the disaffected youth portion.)

The past cannot remember the past. The future can’t generate the future. The cutting edge of this instant right here and now is always nothing less than the totality of everything there is.

Zen and the Art of Motorcycle Maintenance is one of the most ambitious books I’ve ever read. It’s not really about Zen, and it’s not really about motorcycles. It’s not really about any one thing. In the afterword, which was written in 1984, 10 years after the book was first published, Pirsig says Zen arrived at exactly the right moment, offering an alternative to the unsustainability of the counterculture of the ’60s and the materialism of the uber-capitalist America of the ’50s. The subtitle — “An Inquiry Into Values” — gives some clue as to what Pirsig is trying to accomplish.

Pirsig is a borderline genius. His IQ is reported to be 170. He started college at 15. This isn’t an easy book. Complex ideas are introduced and explored and the reader would be well served to know at least a little about the history of philosophical thought, especially Plato and Aristotle. But Pirsig did do a great job making these complex, often lay-person-unreachable issues understandable to most any attentive reader. He could have very easily written a highly technical, insular book for professors of philosophy and its students, shutting out us normal folk. But instead he made the effort, the momentous effort if I had to guess, to dumb it down — or maybe better phrased, make it more relatable — while staying faithful to his overall goal. He wrote one of the few serious philosophical books able to be read by a wide audience. 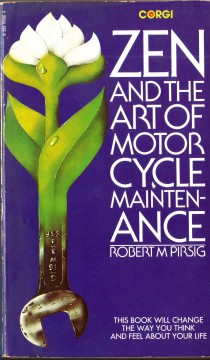 Basic plot summary: Pirsig and his son Chris embark on a motorcycle trip across western America — from Minnesota to California. The first fourth of the book is all about their journey interspersed with insights into the value and issues of technology in our modern society. Joining father and son for a portion of the trip are Pirsig’s friend John and John’s wife Sylvia.

Pirsig presents himself as an analytical thinker. He studied chemistry in college and wrote technical manuals for various systems and appliances. John is some sort of artistic type. Pirsig uses John and their opposing views on motorcycle maintenance as a foil to present two different views of human understanding — the romantic and the classical.

. . . is primarily inspirational, imaginative, creative, intuitive. Feelings rather than facts predominate. “Art” when it is opposed to “Science” is often romantic. It does not proceed by reason or by laws. It proceeds by feeling, intuition and esthetic conscience.

. . . is straightforward, unadorned, unemotional, economical and carefully proportioned. Its purpose is not to inspire emotionally, but to bring order out of chaos and make the unknown known. It is not an esthetically free and natural style. It is esthetically restrained. Everything is under control.

The romantic-classical dichotomy becomes increasingly important as the book’s focus shifts to Pirsig’s earlier life as Phaedrus, which is what he calls his “former personality” (quotes to be explained). Pirsig spent time in various mental institutions from 1961 to 1963, during which he underwent involuntary electric-shock treatment, which is now illegal. Zen makes the reader think Pirsig was totally disassociated from his former personality — Phaedrus — and is in effect a totally new person. Phaedrus is presented as a type of ghost who haunts the trip. I had a hard time believing Pirsig’s personality was so evenly split — then and now — between Pirsig of Zen and Phaedrus. The ending of the book and later interviews seem to indicate Pirsig was always Phaedrus but had to hide this to be able to gain his freedom. (“When somebody goes outside the cultural norms, the culture has to protect itself.”) He, understandably, leaves the personality conundrum murky. 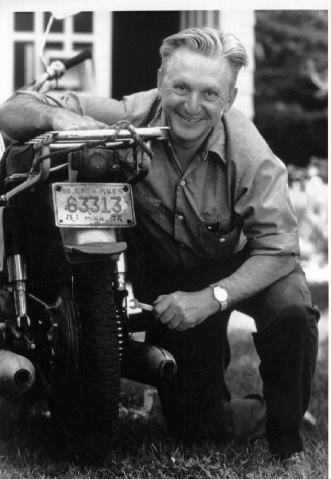 When spontaneity and individuality and really good original stuff occurred in a classroom it was in spite of instruction, not because of it.

— he becomes obsessed with the idea of Quality, or what makes things “good.” He presents Quality as an indefinable substance. It’s what divides the “hip” and the “square.” Through various classroom exercises he decides Quality is intuitive, able to be recognized almost instantly. But what Pirsig seeks, or what Phaedrus seeks, what drives Phaedrus to “insanity,” is his desire to define Quality and find a spot for it outside the traditional romantic-classical split. Presented in Zen, Pirsig was trying to create an entirely new way of viewing reality outside subjective and objective terms. At one point, as Phaedrus, he takes a big dump on the entire founding of Western thought along the Aristotelian line of reason. (Hence the genesis of the name Phaedrus.) I told you, ambitious.

I think that the referent of a term that can split a world into hip and square, classic and romantic, technological and humanistic, is an entity that can unite a world already split along these lines into one. A real understanding of Quality doesn’t just serve the System, or even beat it or even escape it. A real understanding of Quality captures the System, tames it, and puts it to work for one’s own personal use, while leaving one completely free to fulfill his inner destiny.

His initial ideas of Quality have blossomed into a full system known as the Metaphysics of Quality. His second book, Lila, which I haven’t read, is part of that growth from vaguely-defined set of ideas into full-blown philosophical theory of reality.

I don’t have the mental firepower to give you any revealing insights into MOQ without more study. It’s an interesting and complex viewpoint. I don’t know if it’s right or wrong, or even if the terms right or wrong should be applied, but I do know when Pirsig talks about the intuitive understanding of Quality and the power of our collective human consciousness, even if that consciousness is more shared social structure than biological, I understand and affirm. That’s clicking in my mind. That’s why certain passages in books, or certain songs, or whatever else, resonate to a broad, diverse group. I do believe good art can be identified. I believe there is a hierarchy, not for the sake of pomposity or self-importance, but for objectivity, or as objective as “taste” can be. I believe that some things are better than other things. To deny that is to slip into a never-ending hole of relativism.

Zen and the Art of Motorcycle Maintenance, for all its high-minded talk and ruminations about Quality and dualistic systems, is a book about how to improve your day-to-day life. It’s much more than I’ve attempted to explain. It’s about living with technology. It’s about thought and skepticism. It’s about how to slow down and care. How to create quality through conscious action. How to be more aware daily. How to realize now is all.

All this to say: “Hey, if you’ve got a couple free afternoons, maybe you should read this book. I think it’s worth your time.”

The past cannot remember the past. The future can’t generate the future. The cutting edge of this instant right here and now is always nothing less than the totality of everything there is.