Sports’ fiercest rivalry will hit the ice tonight when Auburn’s university recognized (but still unfunded) club hockey team faces off against the University of Alabama’s Frozen Tide in the first ever “Iron Cup”.

The three-game weekend series will be held at the Pelham Civic Complex; the first match starts at 8 p.m. 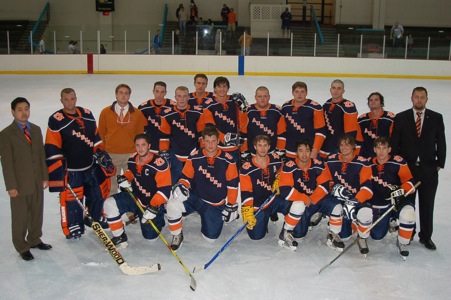 “There is no doubt that both teams are going to be going out and looking to play hard and come away with that awesome trophy,” said Chenger, who resurrected Auburn’s hockey team from a 28 year hiatus (Auburn had a hockey team from 1979-82). “Having said that we are definitely the underdogs in this match up.”

Alabama started it’s hockey team in 2004; Auburn, the last SEC school to organize a team, has only been playing since May. It’s best win of the season came against LSU in October.

“Bama has had 6 years to recruit and build the type of team that is capable of playing with DII schools,” Chenger said. “I have the utmost confidence that our guys have the talent to play with any team in the SEC.”

One player who could help Auburn pull off an upset is Brandon Polk, a senior from Lawrenceville, Ga., and the backbone of Auburn’s offense.

“I think tonight will just be yet another test to us to see how much progress we are making in our season. And how much the guys want it.”

Ticket prices for tonight’s match are $5 for adults and $4 for students. Children 5 and under get in free. A live feed of the game can be watched via the Frozen Tide’s Ustream channel.