Auburn legend Zeke Smith passed away Friday at the age of 79. Now, if God decides to make a movie called “1950s Football Player,” I’m pretty sure He’ll cast Zeke for every role. That face. That body. That name. Or at least that nickname.   Because “Roger Smith” just doesn’t have the same ring to it. “Roger Smith” is […] 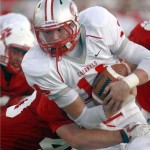 Solid verbals don’t get much more solid than this…