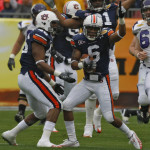 So as expected, the Outback Bowl’s official announcement yesterday confirmed that “proactive” Auburn had received the bowl’s SEC invitation and would be heading to Tampa. What was substantially less expected: the Tigers’ opponent will be Northwestern rather than Wisconsin, thanks to the Wildcats’ head-to-head victory over the Badgers and the fact that it sounds like even the Outback is tired of seeing Wisconsin plow forward for four yards every first- and second-down with some doughy Ron Dayne clone.