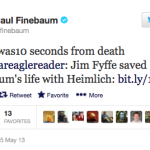 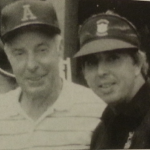 Continuing in our remembrances of all things Fyffe on this, the 10th anniversary of his death, here’s a photo of Jim at some sort of golf thing with Joe DiMaggio from his memoir “Touchdown Auburn!“ Here’s the caption: “Or you might find me hanging out with the likes of Joe DiMaggio. The Yankee Clipper looks […] 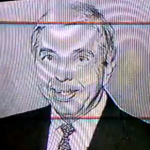 All Elvis was doing was thanking people, thanking them very much. All Jim Fyffe was doing was telling people that Auburn had scored a touchdown. On paper, it was the most unoriginal sports catchphrase ever. On the airwaves, it was magic. (Thanks, jackass golfing Bama fan!) Fyffe died 10 years ago today. He once said […] 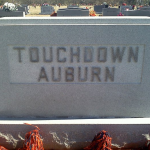 Tomorrow, Jim Fyffe will have been dead for 10 years. He died on May 15, 2003 after suffering a brain aneurysm. He was buried in Greenwood Cemetery in Montgomery. According to FindAGrave.com, this is his tombstone. Related: Jim Fyffe folk art, 2003. … Keep Reading: * Best Auburn majorette name ever? * Pat Dye ‘arrested’ […]

That Rod Bramblett, who has had some great moments in his eight seasons behind the Auburn Network microphone, is still so thought of as “The New Guy” is less a slight against Bramblett than a testament to how loudly the original Touchdown Auburn still resonates in the ears of the Auburn heart. Lord knows how […]